Cooling off at Valencia Waterfall in Colombia

When I arrived to the Caribbean coast from Bogota it was after spending two days in bed racked with a horrible case of diarrhea and upset stomach. I did not eat for almost 24 hours and consumed only sips of juice. Thoughts of some crazy Amazonian disease crept into my mind. I also wondered whether I would even make the next leg of my trip much less swim in Valencia Waterfall. 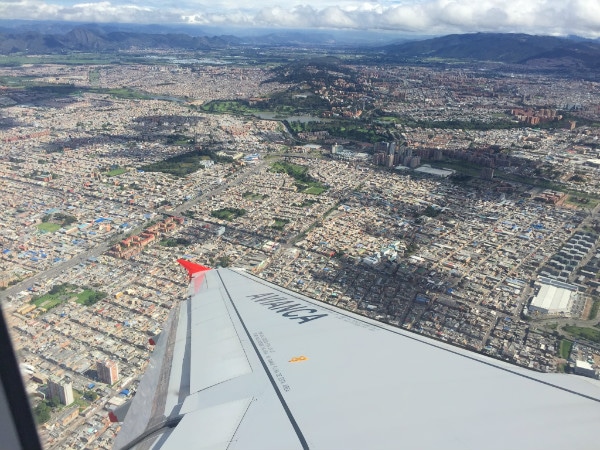 Would sickness derail my plans

I had a 9 a.m. flight, and I somehow was able to scrape myself out of bed and pack and make it to the airport thanks to the help of my host family. They came through with medicine and soup, which was the first thing I consumed in almost a day. I was feeling better, but still far from 100%. 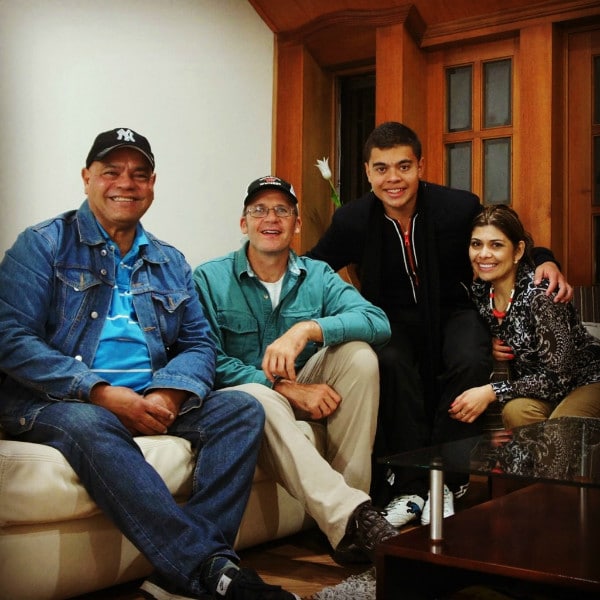 The road to the Tayrona Tented Lodge

Finally, the driver threw up his hands and started driving. We ended up at the Santa Marta Market. I am not sure what he was trying to tell me. He might have been trying to let me know that Tayrona National Park, the big tourist draw in the area, was closed, which I already knew. He also may have been trying to negotiate driving me to my final destination. I will never know. 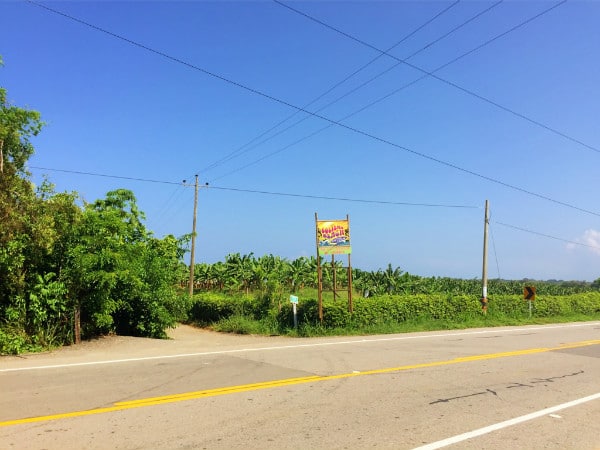 I then grabbed the bus that was heading for Tayrona. It had no air conditioning and made several stops. I explained that I was going to Costeño Beach. The assistant to the bus driver shook his head in understanding and put my backpacks in a pile near the front of the bus. In about an hour we passed Tayrona National Park and soon my destination was coming up. The bus slowed at a dirt road and the driver said Costeño Beach and stopped. I got out, and they handed me my bags, and I waved to the people on the bus and headed up the dirt road. 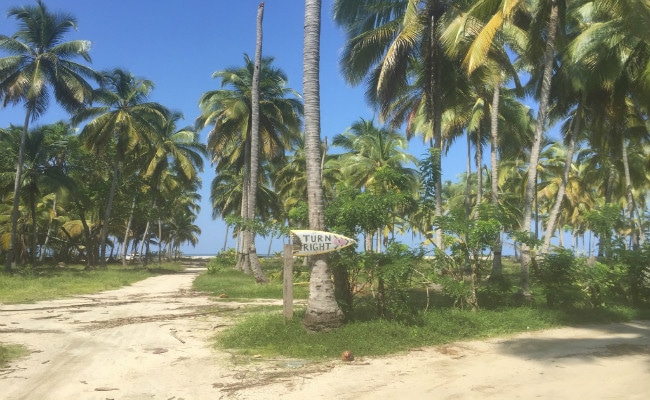 Halfway up the dirt road, and I am dying with two backpacks, but it sure was beautiful

It was a 40 minute walk up the dirt road to the Tayrona Tented Lodge, where I was staying for two days. It was a glamping destination that I made arrangements to stay at in return for a review. Since glamping is derived from the combination of the words “camping” and “glamour,” I thought the location would be somewhat luxurious. What kind of luxury, I had no idea, but it turned out to be quite Spartan. You can read my review here 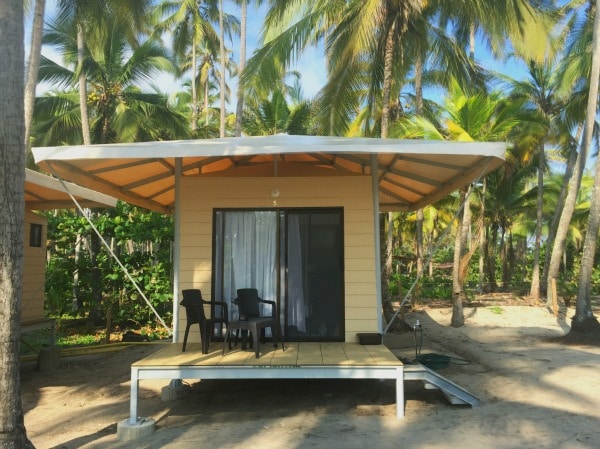 I wrote a positive review for the location, and it deserved it, but in my condition, dehydrated and trying to bounce back from sickness, I was a little disappointed as it was not exactly what I expected. I usually love to camp and enjoy rustic accommodations, but in my present state I need air-conditioning and rest. The place was relaxing, but it was stifling hot. I arrived after my 40 minute walk drenched in sweat. 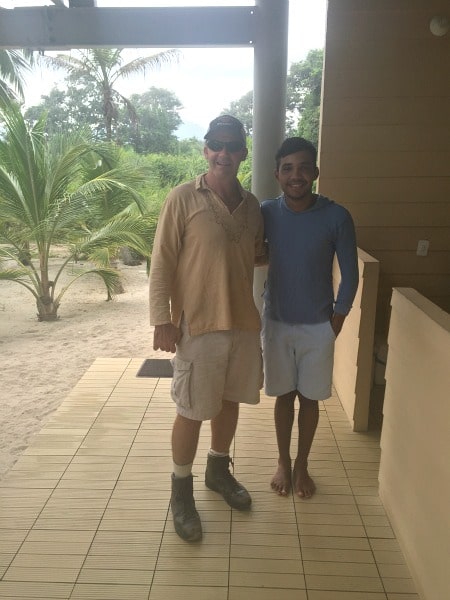 I was met by the manager, the affable Carlos, who explained how the place worked. I asked for juice and they gave me some panella water, which is basically brown sugar water. I downed about three glasses like an alcoholic at a bar with a shot glass who had not had a drink in a week. 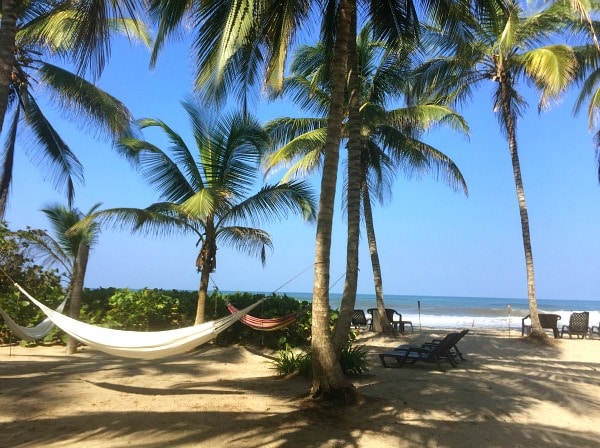 I got to my place and turned on the fan. I drank half of my water bottle that I bought at the front desk in two swigs. I really enjoyed this place, but I was so dehydrated the whole time I was there, and I just could not drink enough water, juice, soda, beer to get back to feeling normal. In fact, I only consumed two beers during my stay because it just made me feel worse. I was woozy the whole two days I was here.

The main destination in this region is Tayrona National Park. Besides the Amazon, this was the second highest item on my list to see in Colombia. Unfortunately, they decided to close the whole national park for the entire month I was visiting. I had already made arrangements for lodging, and I had already booked a flight from Bogota to Santa Marta when I found out about the disappointing news. I decided to come down here anyway before I made my way to Cartagena. At least I had some advanced warning. I met two Americans that did not find out the park was closed until they showed up at the gates. 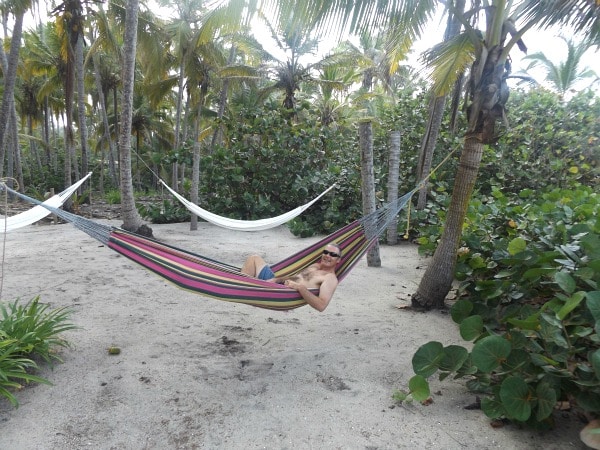 They did have hammocks here

There was not a ton of things to do here at the place I was staying. They were really in a remote area and had no Wi-Fi. There was a surfing camp next door where I normally would have rented a board, but I was too weak to take on such a task. For the most part I just hung around and watched birds and occasionally swam in the ocean.

The one excursion you could do besides Tayrona was head to the waterfall. I arranged with Carlos to have a moto-bike pick me up and drop me off at the Valencia waterfall. The round trip ride cost $3.50. 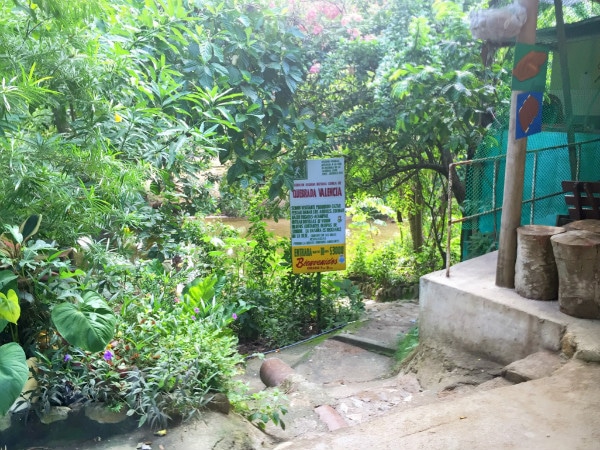 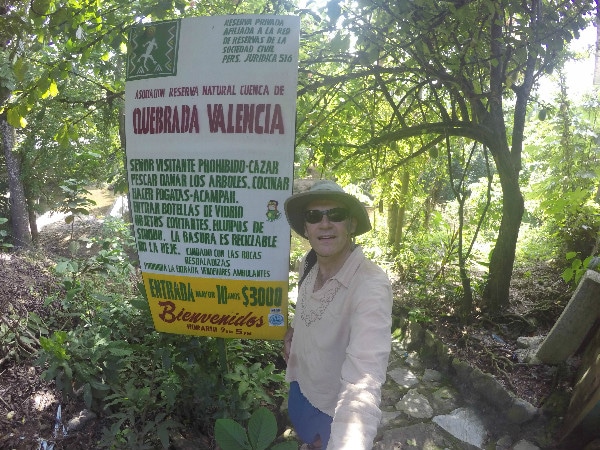 I could take a selfie of myself at the sign for Valencia Waterfall, but I could not find the actual waterfall

Where the hell is Valencia Waterfall

When I got to the waterfall, I could not find the trail. There was a sign, but I could not tell where the trail went, so I started walking. I followed footprints that lead under the bridge and soon found myself in a little rustic village. I ended up walking down a dirt road that ended up at a shack with some mangy dogs. I tip toed away before the dogs woke up. You know what they say about sleeping dogs. I then walked through the village again past a soccer field and all these people started coming up to me. I tried to gesture that I was looking for the waterfall, and one spoke a little English and offered to get a guide to take me to the waterfall. 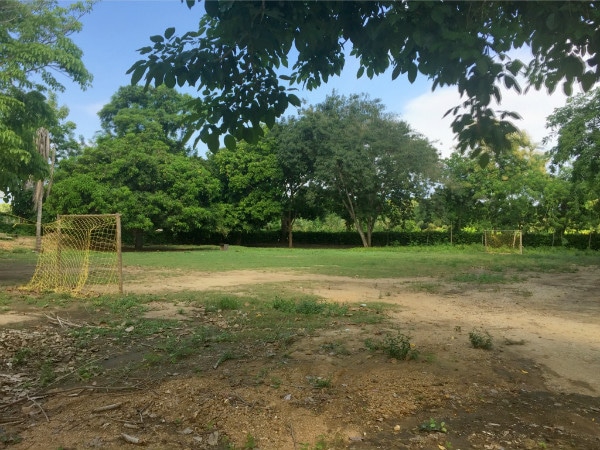 Fleeced by a guide to Valencia Waterfall

A cute young lady showed up, and I was to understand that she would be my guide. I really did not want or need a guide, but not being able to communicate in Spanish, I was not in control here. I mean, I could not even say “where the hell is Valencia Waterfall,” much less, “I don’t need a guide.” All I really needed was for someone to point their finger to where the waterfall was. I was pretty sure I could find it if I just had a nudge in the right direction. Unfortunately, I don’t speak Spanish, and I could not say either “finger,” “point,” or “nudge,” so now I had a guide. The trail to the waterfall was on the other side of the river. You had to cross the river after the sign and the trail proceeded from there. 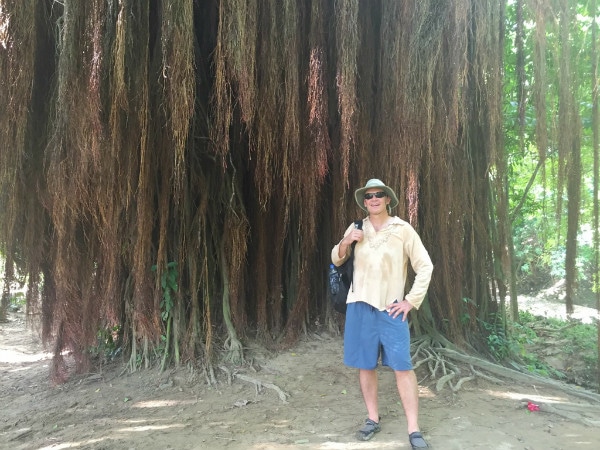 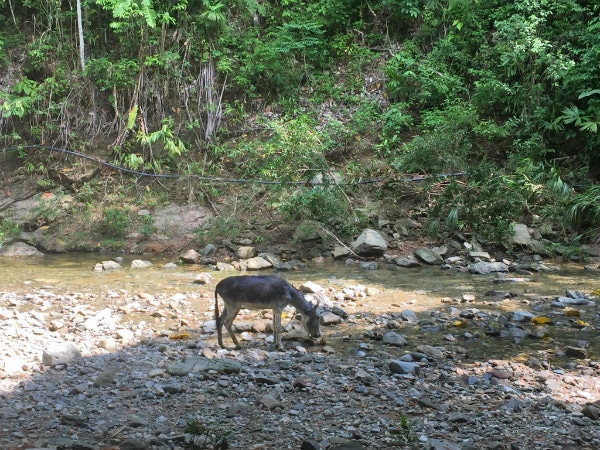 It was super easy to follow once you crossed the river. In about 20 minutes we made it to the waterfall. There were actually a lot of people here. It was my bad luck to show up when no one was walking toward the waterfall because on the way back I passed a bunch of people coming up the trail. 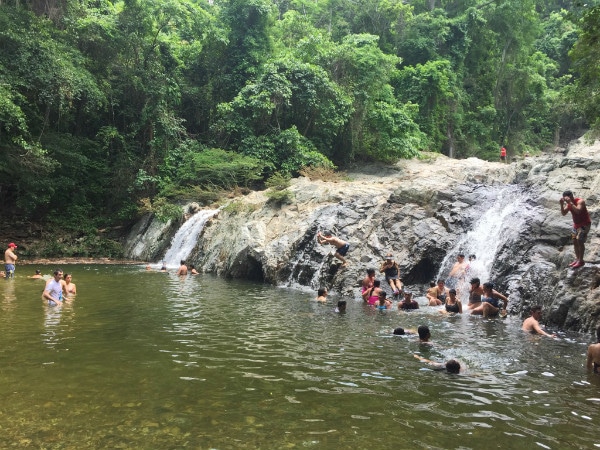 The bottom and least impressive part of the Valencia Waterfall

The waterfall was not all that impressive at first. It was just about a 10-15 foot drop with a pool. About twenty people were swimming in the little pool. My guide took her shoes off, and started to walk up the rocks on the right side of the waterfall. It was pretty steep, but she went straight up. I followed. There was soon another set of falls, and another pool. A few less people were swimming here. We kept climbing. I was dying at this point of thirst and heat and feeling dizzy. 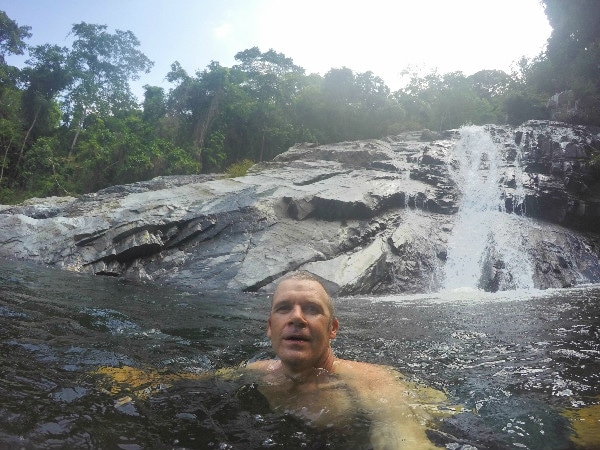 Eventually we came to the top and there was yet another set of falls and another set of pools. My guide started asking for money. I already paid the guy about $3.00, but now she was asking for $8.00. I thought that might be for staying with me while I swam and then taking me back, but I could not understand her. She kept speaking in Spanish as if I would eventually understand. This was getting frustrating. I finally paid her just to shut her up. She took the money and said goodbye. I thought the money was for taking me back, but I was happy she left. I was kind of angry though at the scam and letting myself get used, but I was only out $13.00 for the whole day and this place was beautiful.

I shook off the annoyance at this confrontation and started to swim. I jumped into the pool and it was absolute heaven. It was like walking into a cool air-conditioned room after running a marathon in 100 degree heat. Just thinking about the experience while I am writing is releasing cool endorphins throughout my system. I had never felt so refreshed in my life. 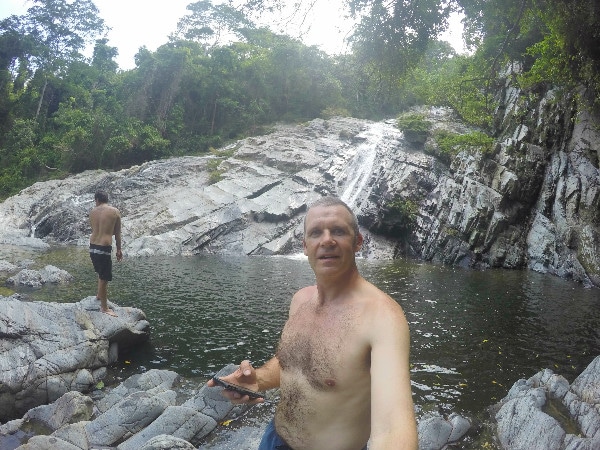 All is good at Valencia Waterfall after my annoying guide left

I swam across the pool and stuck my head over the cascade. The waterfall was pretty high, but the volume of water was not too great, so it was completely safe as long as you could swim. The pool was about 15 feet deep so swimming skills were a must. 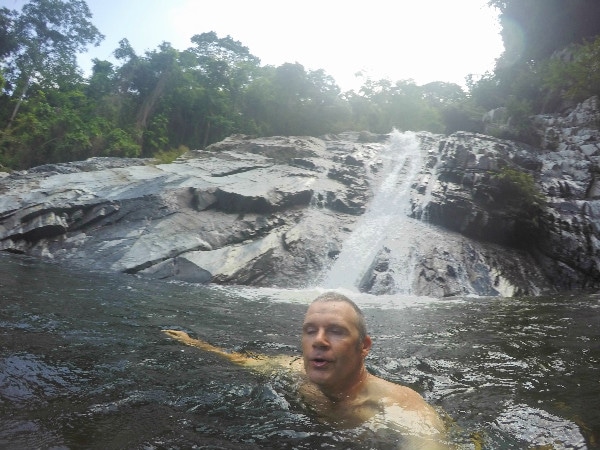 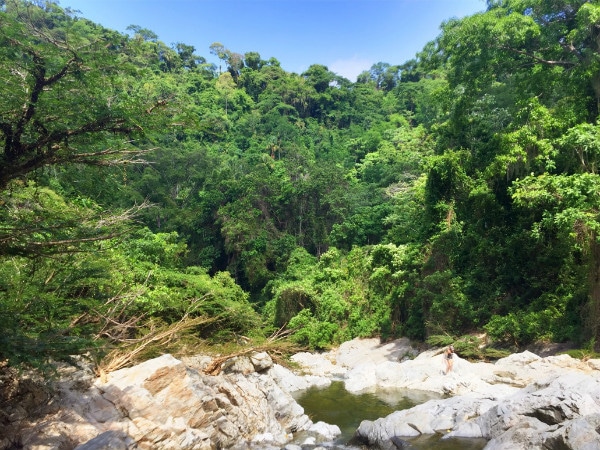 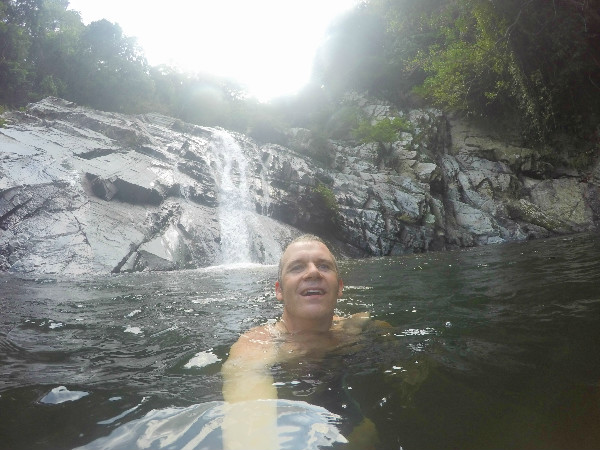 Unfortunately, I had to return to the road for my ride. We buzzed back to the Lodge. The more I thought about the incident with the money and the girl, the more livid I became on the way back. When we got back I tried to tell Carlos about the annoying incident about getting scammed by the girl. I figured he would want to know in order to alert future guests. He said “at least you saw the waterfall,” before I could get to the juicy confrontational part. Slapped in the face by his statement, I stopped talking mid story, dumbfounded by this simple truth.

The loss of $10.00 was so insignificant that it does not even merit a spot on this blog, but I only add it to prove a point. Sometimes you have to filter through unpleasantness in order to enjoy the magic of the moment. Despite being sick, tired, dehydrated, and scammed in a country I was having trouble communicating something as simple as “where is the waterfall,” I still managed to focus on the moment once my guide left. I was in Colombia and swimming in a waterfall and having an amazing time, and that is and was all that mattered.

Traveling Ted newsletter
Your information will *never* be shared or sold to a 3rd party.
2shares