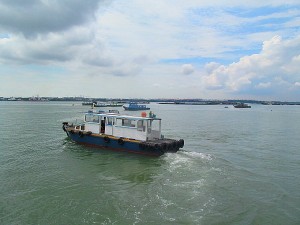 After hiking MacRitchie Park, I thought the jungle trekking in Singapore was over. The friend I was staying with suggested taking a ferry to one of Singapore’s small offshore islands. It seemed like the perfect adventure.

Getting there was a little bit of a challenge as it consisted of subway, bus, ferry. Anytime multiple connections are involved, things can become tenuous. I jumped on the MRT to Tanah Merah and then took bus 2 to the very end of the island nation. At the Changi Village Ferry Terminal I grabbed a ferry to Pulau Ubin. I then had to wait for more people as the ferry goes over when there are 12 people ready to go. It was only a couple of Singapore dollars for the ride over. 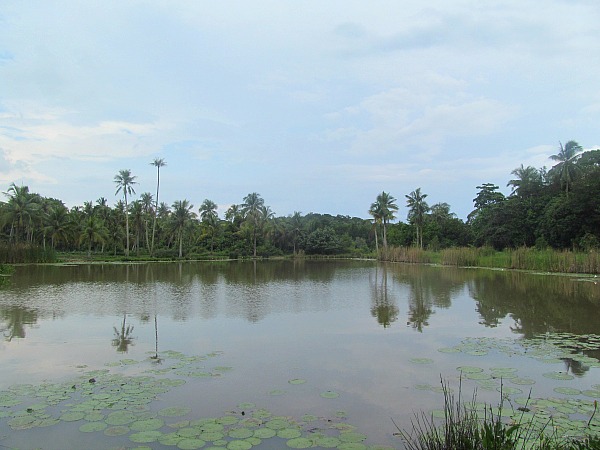 What awaited me in Pulau Ubin

It did not take long for enough people to join the ferry. I waited about 5 minutes and then we boarded and were across the straits to the island in ten minutes. I could see boardwalks along the coast and eagles in flight, so I was excited to get going.

I arrived a little later than I hoped, and the trip to the island took over an hour, so unfortunately, I did not have as much time as I wanted to explore. There are no hotels on the island although you can camp. 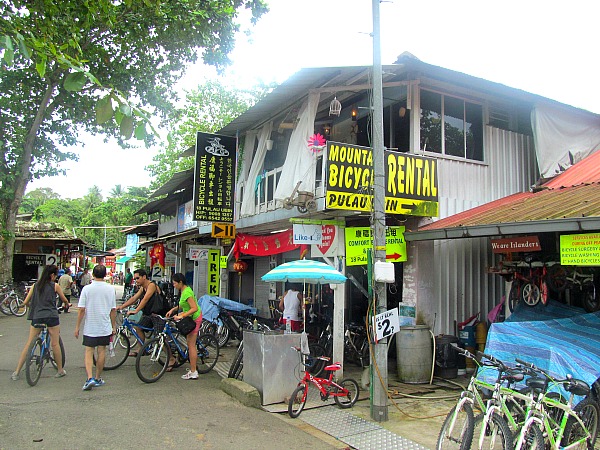 Arrival on the island and the first building are bike rentals

Where the ferry dropped us off there were several bike rentals that greeted us as we approached the small village. I rented a bike for about $6.00 that had to be returned by 4 p.m. There were also several outdoor restaurants in the vicinity and only one was open. I was there in December when it got dark soon after 5 p.m. 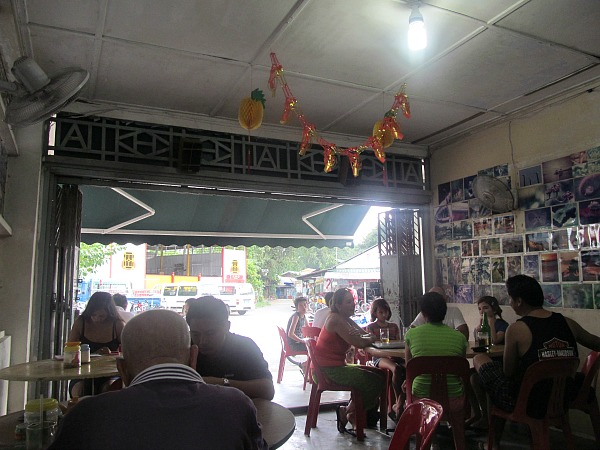 A view from the only restaurant in town at Pulau Ubin

I wish I would have eaten on the mainland first, but I heard the seafood was really good on the island. I ordered some black pepper shrimp at the only open restaurant and about an hour later I got my meal. Despite the long wait, the shrimp was absolutely delicious. 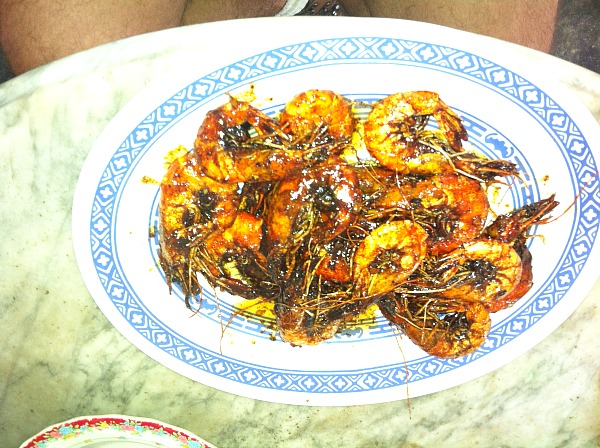 Delicious shrimp was worth the wait

The poor restaurant was swamped and the little lady was literally running around. I was annoyed to lose more time, but there was nothing I could do except relax and drink my beer, something I am quite good at.

I finally got on the bike and headed out on the road. My first stop was the Chek Jawa Wetlands. There was a small Visitor’s Center here and a short trail that looped around the mangrove swamp with a boardwalk on the shoreline that doubled back in the jungle to an observation tower. 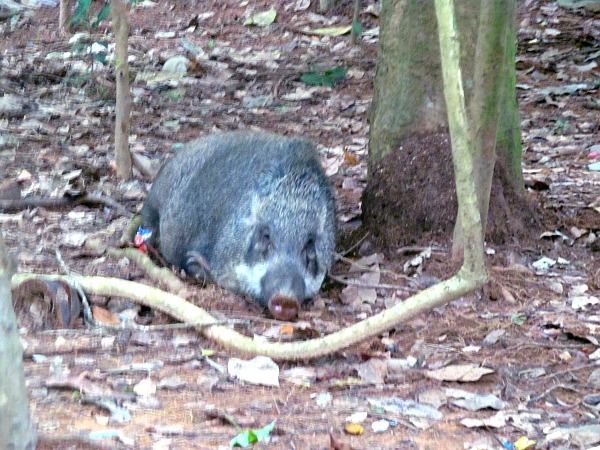 Greeted by a lazy wild pig at Chek Jawa wetlands 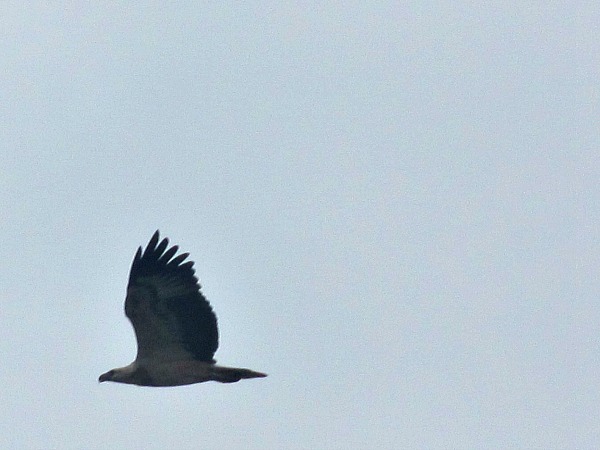 I saw some interesting bird and wildlife including crabs, a funny looking lizard that might have been a monitor lizard, a mud guppy, flocks of parakeets, and eagles from the Jejawi observation tower. There were also wild pigs hanging out at the bike rack where visitors could park their bikes while checking out the trails. There are hornbills on the island, but I did not get to see one of these unfortunately. 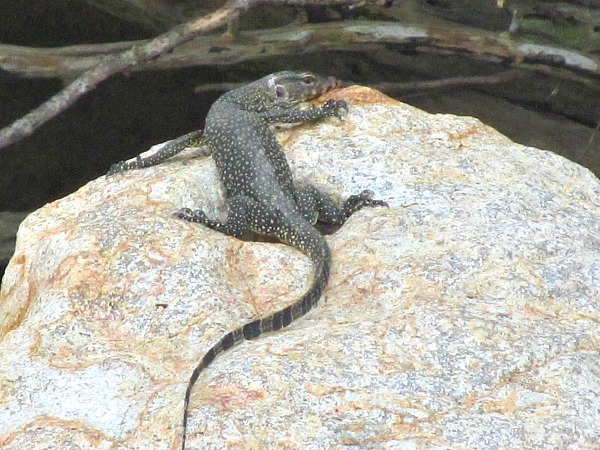 I think this is a small clouded monitor lizard, but not 100% 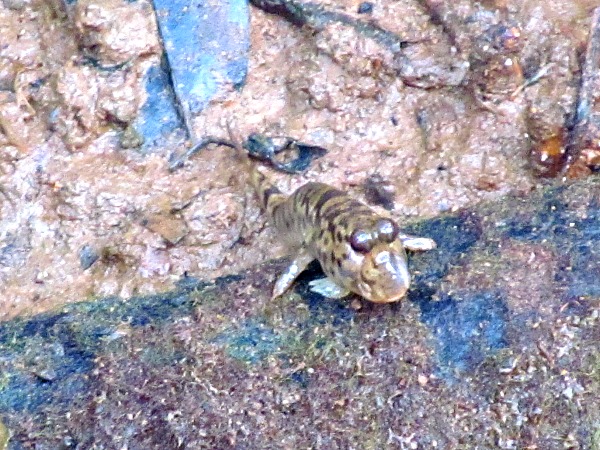 Odd looking creatures in the mangrove swamp at Pulau Ubin 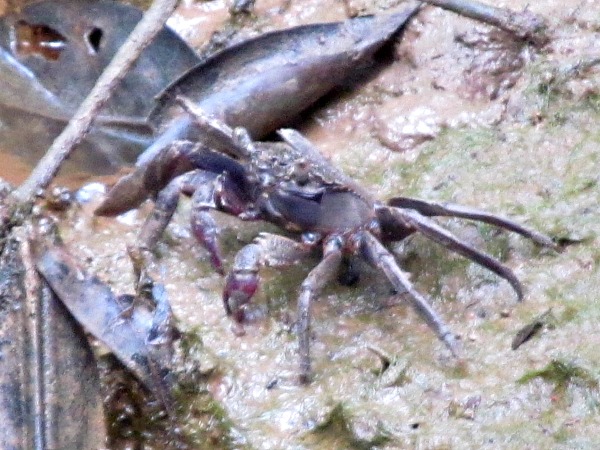 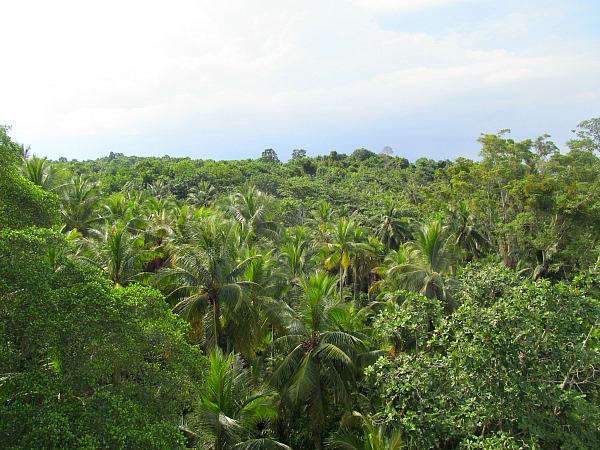 Beautiful greenery down below the Jejawi Tower 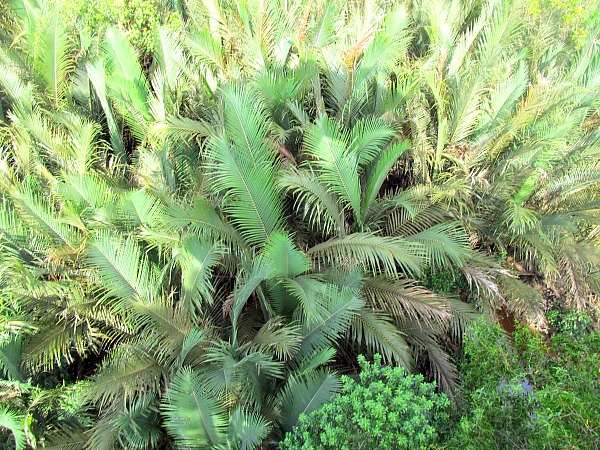 The view straight down from Jejawi Tower in Chek Jawa

The rest of the time I spent biking around the island taking pictures of the jungle. Once again, I found myself in a remote spot. There were others on bikes that I ran into from time-to-time, but for the most part, it seemed I had the whole island to myself. 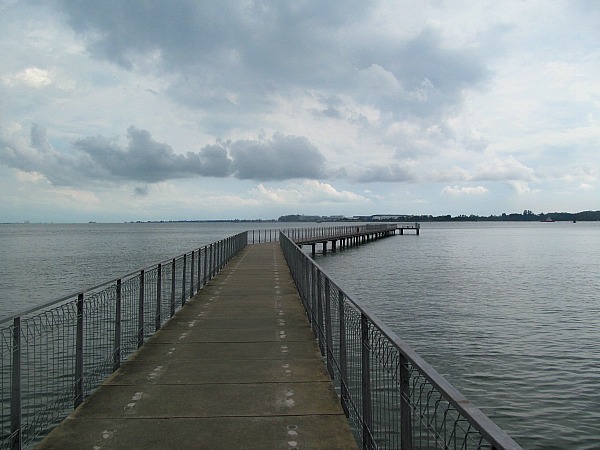 Trails are not limited to the jungle at Pulau Ubin

Unfortunately, that time was too short thanks to the late start. Pulau Ubin is a place I would recommend either getting to really early in the morning, or staying overnight at a campground. 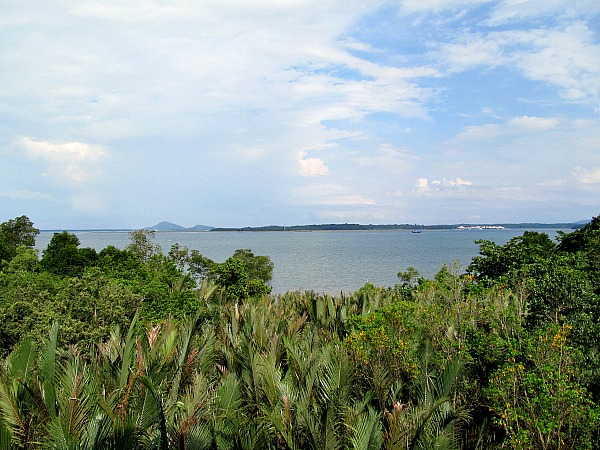 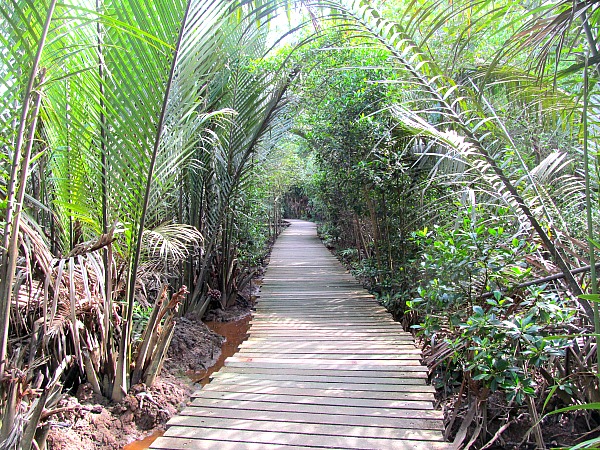 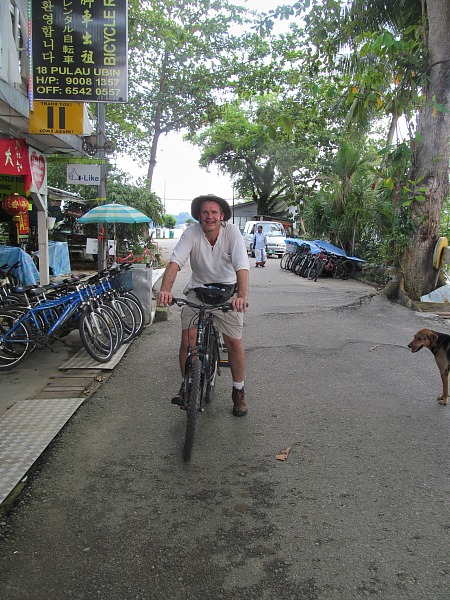 In my two full days in Singapore, I hiked through a jungle park in the middle of the most densely populated country in the world, and enjoyed a bike ride through a birding paradise in the Chek Jawa wetlands at an offshore island. 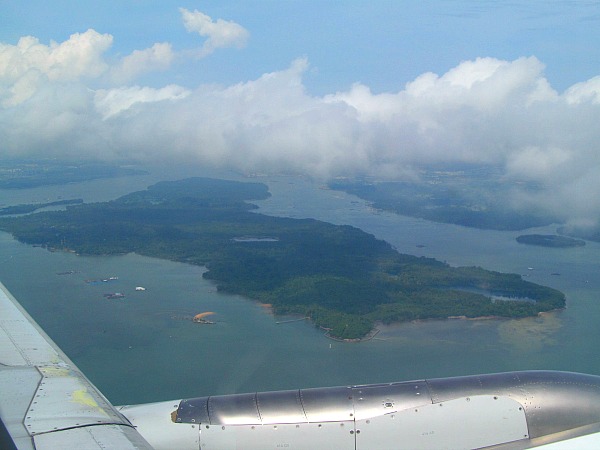 When I took off from the airport the next day, I looked down as we gained altitude and could see the boardwalk on Pulau Ubin in the Chek Jawa Wetlands that I had explored just the day before. Singapore turned out to be a surprise and much more than a giant Southeast Asian metropolis.