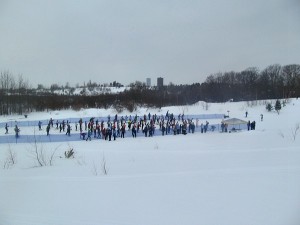 Racers que at the beginning of the Great Bear Chase

The Birkie and the Great Bear Chase

Over the last two weeks, I have had the pleasure and pain of experiencing two awesome cross-country skiing races in the Midwest. I participated in the American Birkebeiner or affectionately known as the “Birkie” in late February and this past week I skied the Great Bear Chase in Calumet, Michigan. They turned out to both be amazing adventures.

It was my third Birkie, but just my first Great Bear Chase. I was constantly comparing the two races during my time in the Upper Peninsula of Michigan. Here are some of my observations. 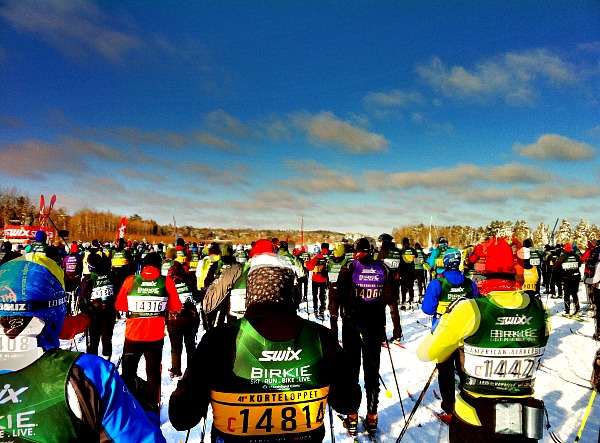 The start of one wave of the Birkie Classic

The Birkie is 54 kilometers from Cable to Hayward, Wisconsin and goes through some of the most rugged terrain you will find on any ski trail. Except for the last 4 kilometers over Lake Hayward, it seems the Birkie is either up or down and is quite a grind. 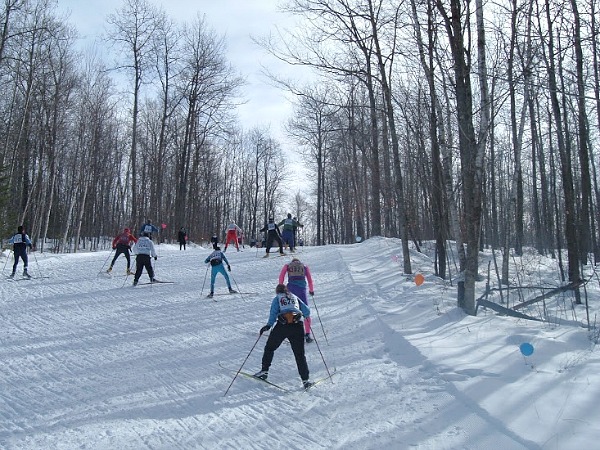 There is a lot of this going on at the Birkie

The Great Bear Chase takes place on the Swedetown Trail system. The 50 kilometer race loops the trails twice, so unlike the Birkie it is two loops instead of one long trail. The Swedetown Trails are much more flat although there are enough hills to make it interesting. 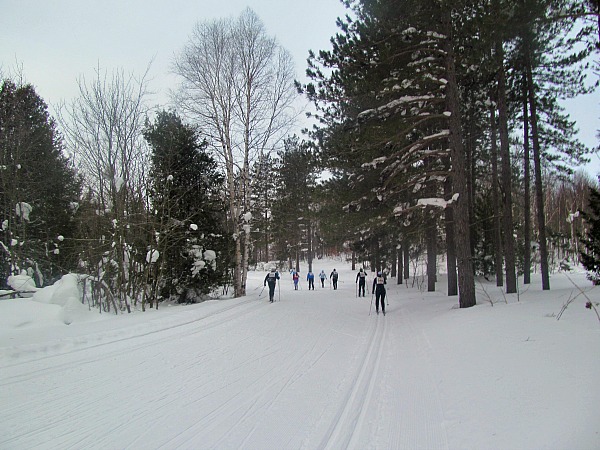 The beginning of the Great Bear Chase

These differences can be a positive or a negative depending on your outlook. Although the Birkie is tougher, the hills are more fun and the tough course seems like more of an accomplishment. On the other hand, if you are racing and want to go fast, the Swedetown Trails are much more ski racer friendly, so if a fast time is important to you then the Great Bear Chase might be for you. My times in the Birkie were 5:54, 5:31, and 5:34; whereas, my time on the Great Bear Chase was 4:52. Even though the Great Bear Chase is 4 kilometers less, it was a nice moral victory to race under 5 hours.

The fact that the Great Bear Chase has two loops also might be a positive or a negative. Some might prefer the Birkie because you do not backtrack, so all scenery is fresh, while others might like the two loop option in Michigan as it is more convenient for getting a split. 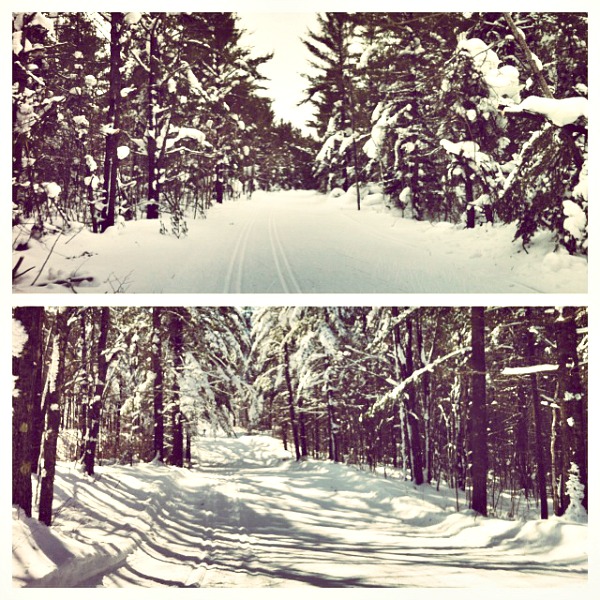 The Birkie is the king of the cross-country races in North America with over 10,000 participants. The Great Bear Chase only has 500. The morning of the Great Bear Chase, I left my Bed and Breakfast, which was five miles from the starting line, a half hour before the start and made it to the course just in time. If I pulled that stunt at the Birkie I would be hours late. 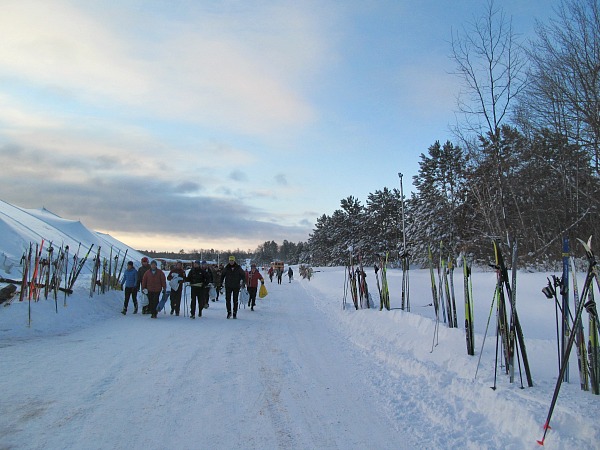 There are crowds everywhere at the Birkie

The bus for the Birkie leaves at 6 a.m. from Hayward and arrives an hour or more to the starting line depending on your wave. Then you sit in a warming tent waiting for your start time. There are no lines at the Great Bear Chase. It took me ten minutes to get registered at the bib pick up. It can take 30 minutes at the Birkie and then another 30 minutes to get to and from your car.

At the Birkie, the race is really packed until the point when the Korteloppet racers veer off on their own course about ten kilometers into the race. The start is especially tight. There are rarely times when you are not within sight of other racers and usually within a pack. 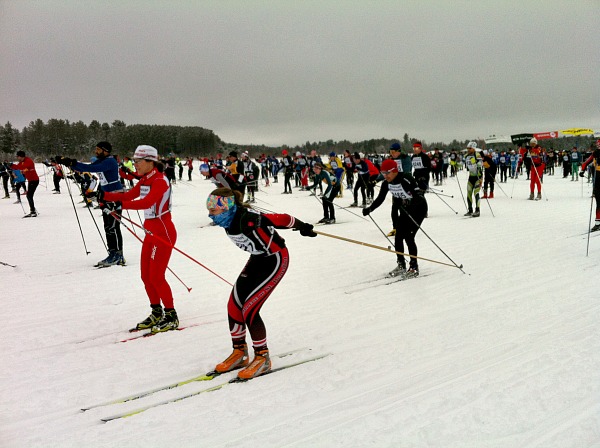 One wave of the Birkie start

At the Great Bear Chase it was a little tight at the beginning, but after a kilometer or two the race really spread out. There were times I was skiing by myself in the woods for 15 minutes without seeing anyone. The skate race started an hour later, so about two hours into the race the skaters started to fly by, but even then there were periods of downright solitude. 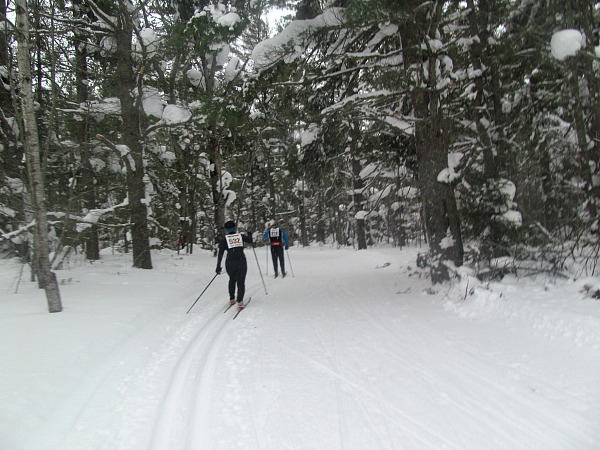 Only a few kilometers into the Great Bear Chase

The Birkie takes place in Cable and Hayward in the great northwoods of Wisconsin. The Great Bear Chase takes place in Calumet, Michigan in the Keweenaw Peninsula just north of Houghton in the Upper Peninsula. Both towns have a small town wilderness charm with beautiful scenery. 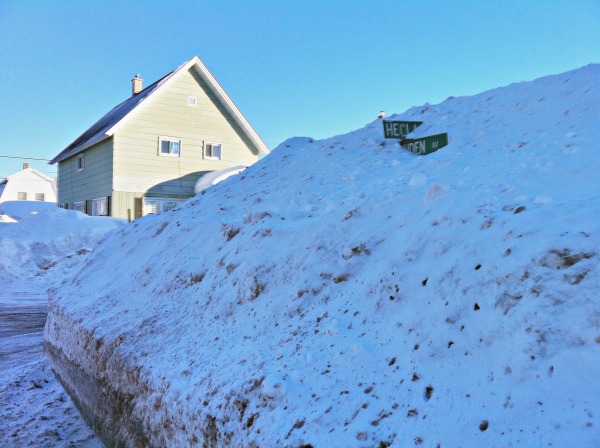 The snow in Hayward was intense, but the piles of snow in Calumet were off the charts

You can pretty much depend on good snow at the Birkie in February. This past year the course was hit with 15 inches two nights before the race. The snow in the Upper Peninsula is off the charts though. They routinely get over 230 inches and this year are creeping over 250 inches. I have not seen snow like I did in Michigan since I was in the Wasatch Mountains in Utah where they get over 400 inches. 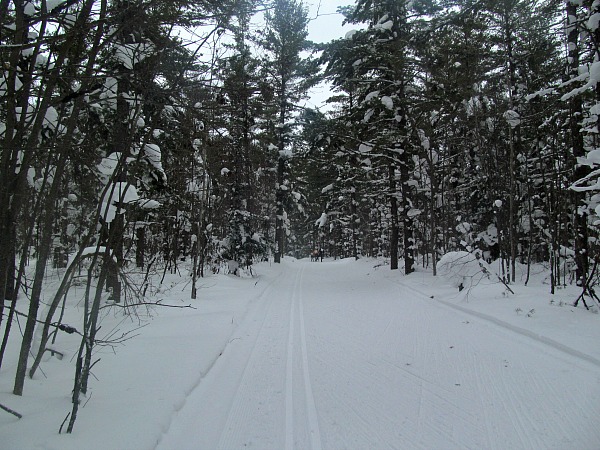 This post is not to sway readers to one race or the other.  You can read the differences and decide yourself if either race appeals to you. Both races are a great adventure and both trail systems are absolutely gorgeous, so I recommend both.

Part of my stay in Calumet was taken care of by the race, but this did not sway my thoughts as the above observations, photos, and thoughts are my own. I would like to thank Madshus skis for lending me a pair of racing skis for the Birkie and Cross-Country Sports in Calumet for doing the same for the Great Bear Chase.