Support Ted Ligety Every Step of the Way 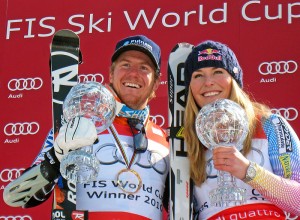 Ted Ligety and Lindsay Vonn at the World Cup in Germany

Ted Ligety won gold medal for the United States in the 2006 Winter Olympics in Torino. This was an amazing accomplishment for someone to be at the top of their field. It was nice to see a Ted conquer the world and the slopes.

There are two other reasons to like Ted Ligety besides his Olympic accomplishments and great name. One, he was someone who worked extremely hard to get to the top in 2006. He started off slow as a kid and routinely was defeated, but after ten years of intense training, he began to see the results, which of course culminated in his gold medal victory.

Unfortunately, this success did not parlay into continued Olympic success.  He placed a disappointing 9th in the 2010 Olympics in Vancouver. Most athletes would have packed it in after that, but Ted made an incredible comeback going back to the drawing board and training and studying hard.

In 2013 this re-dedication paid off at the Ski Racing Championship in Austria. He became the first person to win three golds at this event in the last 45 years. He won the giant slalom, the super G, and the combined. Let us hope this success carries over to 2014 and we see Ted once again hoisting Olympic Gold at Sochi.

Another reason to like Ted, is his philanthropic work with inner city kids. Ted has teamed up with Citi in the Every Step of the Way youth enrichment program. Ted believes that the challenges one overcomes and faces while skiing would benefit youths, especially ones that perhaps do not have the means for Alpine Skiing.

Anyone who has skied before knows the costs can be considerable. There is transportation, equipment, lodging, food, lift tickets, so the task is considerable. The fact that Ted is taking time out of his busy schedule to support inner city kids is commendable.

I have substitute taught in the Chicago Public School system, and I believe these programs are essential. These students who only see the cruel concrete jungle every day need this release and this type of opportunity. Anyone knows the serenity one feels when they see the amazing landscapes and breath beautiful mountain air. It is great to see there is a program to enable underprivileged youths this opportunity.

The every step of the way program is 9 U.S. Olympic Athletes that support a cause. You can choose where the funds go by visiting Every Step of the Way page and find an athlete who supports a cause you believe in. I suggest you pick Ted.

This post was created in partnership with Citi®. All thoughts and opinions are my own.