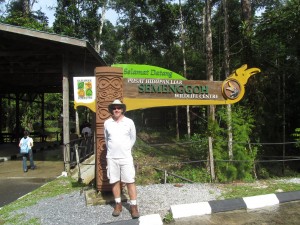 One item that was not on my list to see in Borneo was any orangutan center displaying semi-wild orangutans. I prefer seeing wild animals over semi-wild or captured in a zoo as it is more of an adventure. However, the Semenggoh Wildlife Center was on my itinerary as it was convenient to schedule with Gunung Gading National Park, which was the next stop.

Although it was not an activity that was a priority for me, I figured it would be in a beautiful jungle area and it would be cool to see orangutans even though they were not technically wild. I ended up enjoying the place much more than I thought. 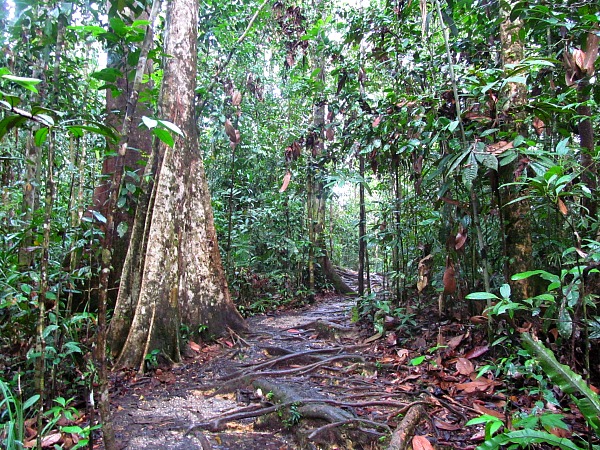 The trail leading to the feeding platform at Semenggoh Wildlife Center

Semenggoh Wildlife Center is about a half hour south outside of Kuching in Sarawak, Borneo. The Center was set up in 1975 to care for injured, orphaned, or animals previously kept as illegal pets. It has been a resounding success with a stable orangutan population that has even seen numerous offspring born to rehabilitated mothers.

The best time to come is during feeding time, which occurs at 9:00-9:30 a.m. and 3:00-3:30 p.m daily. I was there in early December. I was told that since there was so much natural fruit available to the resident orangutan population that they may not come for their 9:00 a.m. meal. I hoped I would not be shut out. 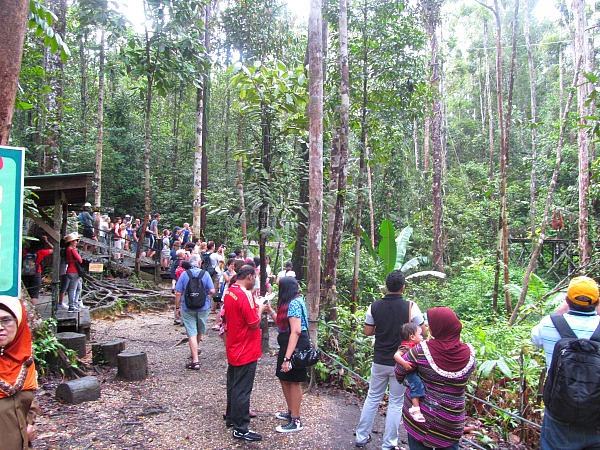 The orangutan paparazi enjoying the view at the Semenggoh Wildlife Center

I arrived to the Wildlife Center and walked up a gravel trail through a thick jungle canopy. About a quarter mile up the trail was a viewing area with about 40 people clicking away. The object of their photo fascination was a feeding platform about 50 yards away manned by a park ranger and a large female orangutan. 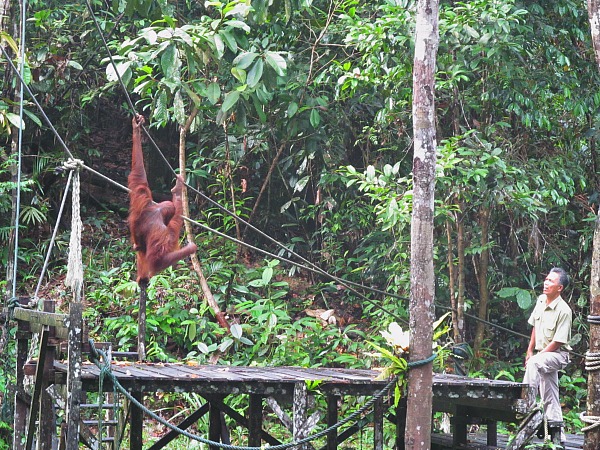 A female orangutan hanging over the feeding platform

On the platform was various fruits like bananas and other goodies. Descending down from the trees were these metal wires, which allowed the animals to easily access the platform and back up into their treetop environment. Hanging on to one of these wires was the orangutan. It had its back to us and had one arm and leg securely on the wire and the other one was scooping up fruit and feeding itself.

I was immediately amazed by this animal. What struck me the most was the size and strength of its arms. Their arms were longer than their body. Their hands were also big and strong too as it easily grasped the chord to keep itself suspended in the air.

The orangutan pivoted its body in mid air at one point to show that it had a freeloader. A baby orangutan was hanging from its stomach. Mom grabbed some food and offered it to her baby. Quiet oohs and ahs were uttered from the orangutan paparazzi. 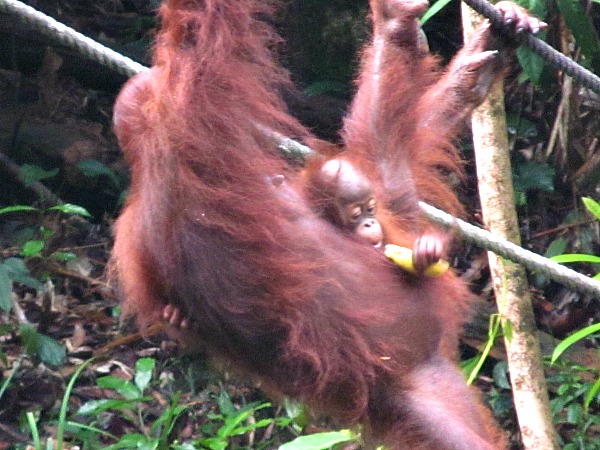 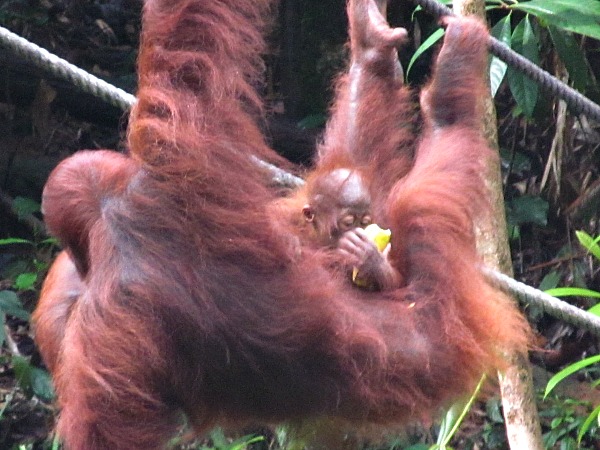 Another shot of mother and baby

Then another animal joined the scene. He came cruising in from the jungle doing somersaults in the air while holding on to the metal chord. He descended onto the platform and quickly grabbed a bushel of bananas and stuck them in his mouth and then climbed back up to the safety of the trees. He looked like he had banana teeth. 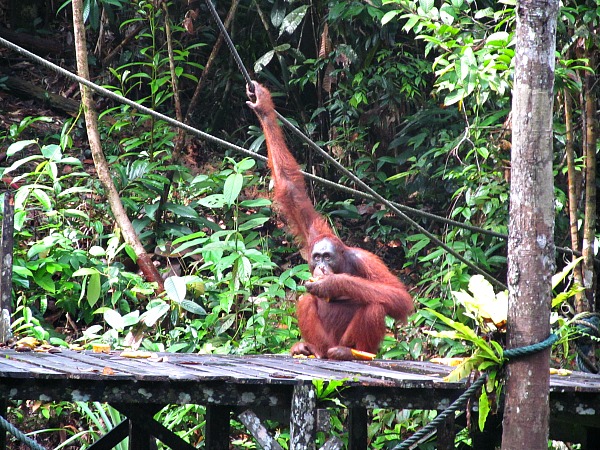 Look at the arm on this guy 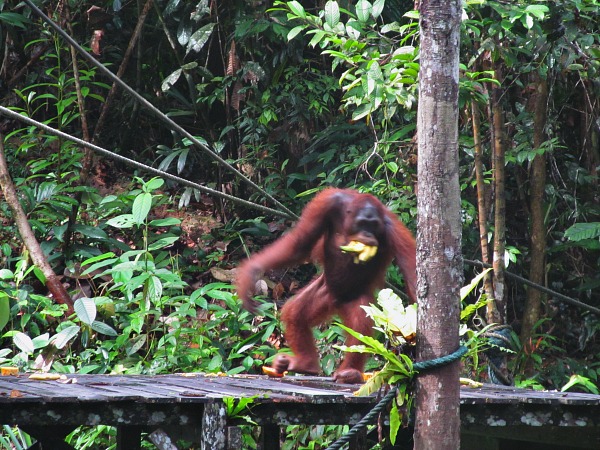 Although seeing orangatans at Semenggoh Wildlife Center was not as unique as the thrill of seeing a wild animal in its natural wild habitat, it was still a cool experience I felt fortunate to have. I would not have signed up for this on my own, but since Planet Borneo set this up in conjunction with another tour that day, I was able to experience this. Sometimes it is good when fate plays a hand in your travel plans and other forces overcome your stubbornness, and you end up enjoying a trip you might not have even begun. 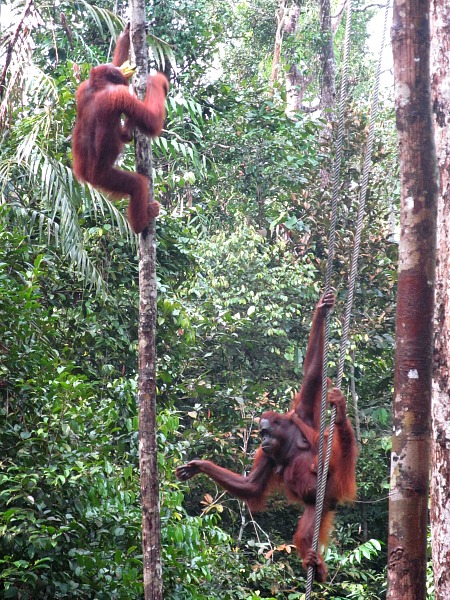 Mr. banana teeth looking for a quick getaway with a whole bushel of bananas

Even if you are a diehard wilderness purist and only like seeing wild animals in wild settings, if you have an afternoon free in Kuching, I would recommend a trip to the Semenggoh Wildlife Center. The place is so interesting they added another “g” and an “h” for good measure to emphasis that you should ggoh. 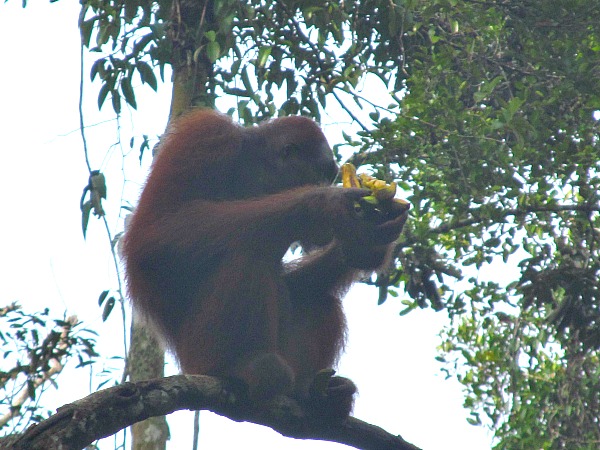 In the safety of the treetops Mr. banana teeth begins to consume his prize 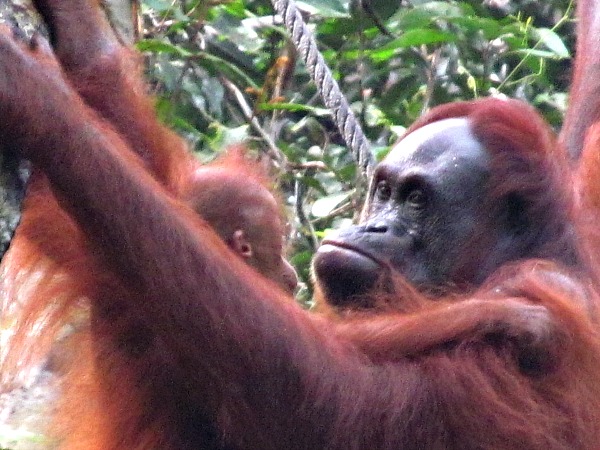 One last look at mom and baby at Semenggoh Wildlife Center

During my stay in Kuching, I was a guest of Planet Borneo who also provided this tour. My thoughts on this tour were not swayed by their hospitality. The thoughts, pictures, and bad ggoh pun was purely my own. I do highly recommend them for tours and for your stay in Kuching.

The goal of Traveling Ted is to inspire people to outdoor adventure travel and then provide tips on where and how to go. If you liked this post then enter your email in the box to receive an email newsletter each week with new stories and adventures. There is no spam and email information will not be shared. Other e-follow options include Facebook (click on the like box to the right) or twitter (click on the pretty bird on the rainbow above). On the right sidebar is a donate button. If you would like to donate in order to support the site, it would be appreciated. All donations would cover travel expenses and improvements to make the site better.