A favorite activity for people who live in Chicago is bar hopping. Sometimes it is referred to as a bar crawl. It consists of having a drink or two in a bar and then leaving for another bar for a few drinks followed by another bar and so on. I followed that same routine waterfall hopping Marinette County waterfalls.

Waterfall hopping instead of bar hopping

Bar hopping is popular in Wisconsin too except in many places in this state you will need to drive from bar to bar as they are not as close together as they are in Chicago. For this you will need a designated driver or you could do a different kind of hop. 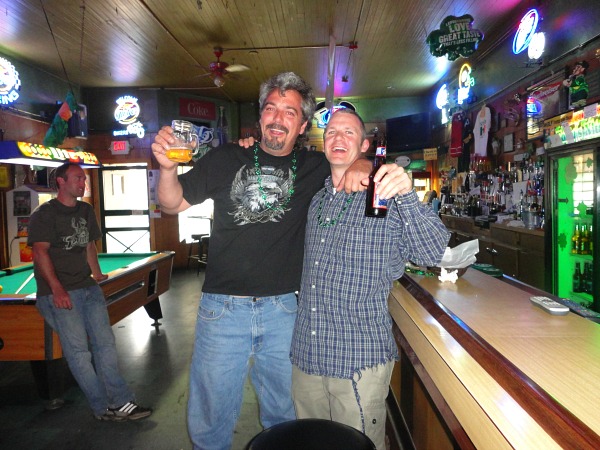 Bar hopping in a Wisconsin bar

On my way home from the great northwoods earlier this summer from Isle Royale and canoeing some Wisconsin rivers, I hopped home. I did not bar hop though as I had an eight hour drive to accomplish, so I hopped waterfalls instead.

Related: Paddling the Wisconsin River headwaters with the Pelican 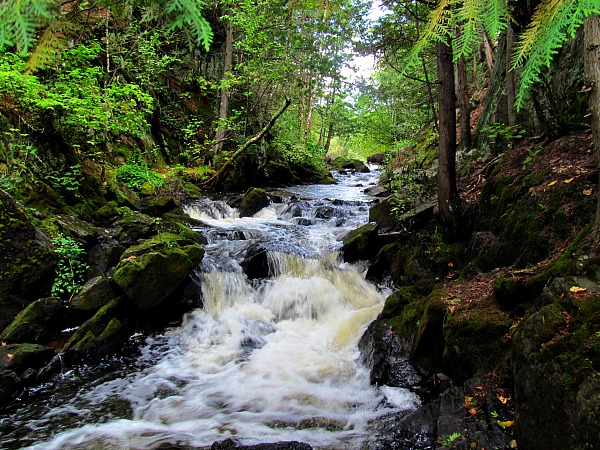 Marinette County is sometimes referred to as the waterfall capital of Wisconsin if not the Midwest. There are at least 14 waterfalls found in this far northern county on the border of the Upper Peninsula of Michigan. Some of the rivers responsible for this turbulent water, rock, gravity combination include the Pike River, Pemebonwon River, Peshtigo River, Thunder River, and Menominee River.

On my way up to Isle Royale I saw a few signs for waterfalls and made a mental note to check these places out. While canoeing northern Wisconsin Rivers with the Mad Paddler, I was told about all the picturesque waterfalls I could visit on the way home.

After canoeing the Pine River, we finished by noon, so I had plenty of time to visit a waterfall or two on my way home. My initial plan intended to only check out 12 Foot Falls and then drive home, but a waterfall hop broke out instead. 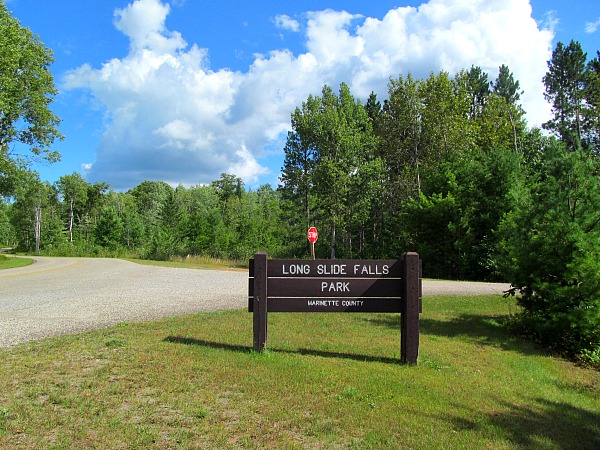 As soon as I headed south from Iron Mountain, Michigan, I immediately came across a sign for Long Slide Falls County Park. I turned right passing Morgan Park and less than a half mile away was another sign to Smalley Falls.

I got out at the parking area and walked about a quarter of a mile to Smalley Falls. This was more of a cascade than an actual falls, but it was nice, and a good waterfall primer. I felt loose, content, and happy after the first waterfall. 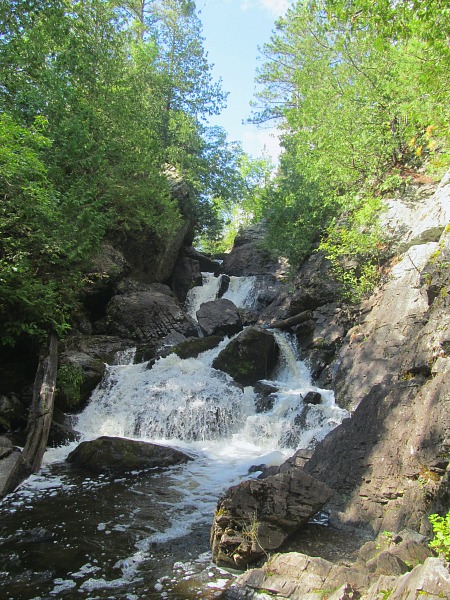 I then proceeded down the road to Long Slide Falls. There was a sign here for $3.00 admission for the day, but the price of admission was good for all in the Marinette County Park system. I quickly found the falls, which was a little grander than Smalley with two falls drops. I returned to the car doing a little waterfall dance because inhibitions began to loosen. 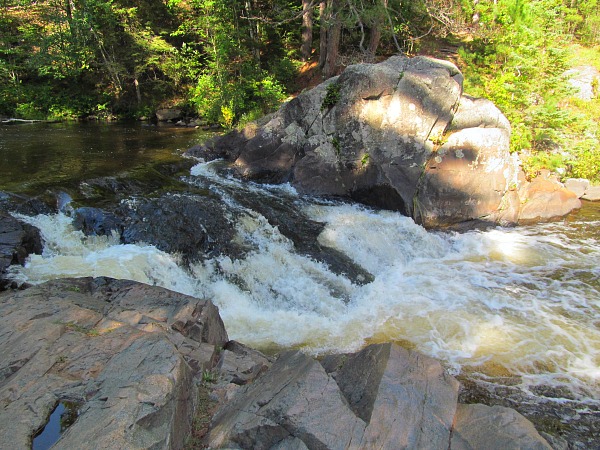 For those who would like to stop hopping and stay awhile, 12 Foot Falls County Park is a park with camping, natural settings, and picnic areas. Perhaps a good idea if you are a lightweight and already drunk on waterfalls. 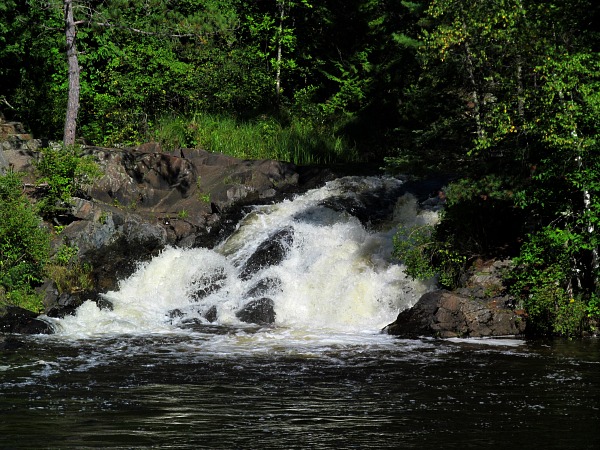 After so many waterfalls in a short amount of time, I could hardly walk back to the car. My vision was blurred and every woman that was in the park was the most beautiful I had ever seen. 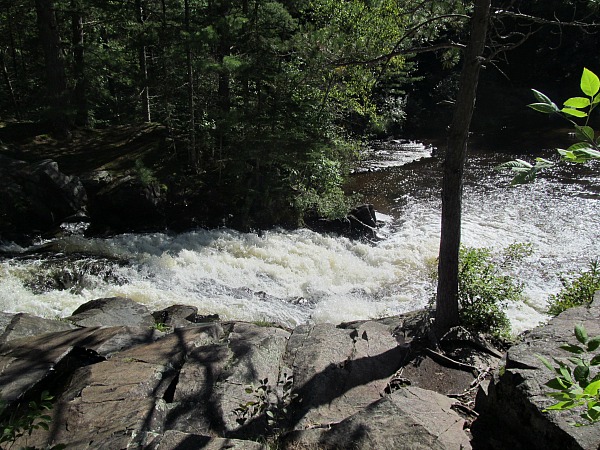 I could barely drive, but I had to make one final stop at Horseshoe Falls. After driving another five miles down Marinette County dirt roads, I checked off waterfall number five for the day. 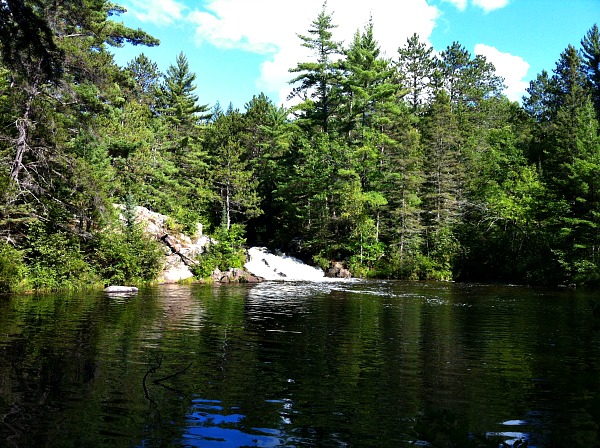 Waterfall hopping Wisconsin – 12 Foot Falls from across the water

By this time the woods were spinning. I felt nauseous, and I was experiencing double-vision. I was completely drunk on the beauty of water and rocks mixed with gravity. 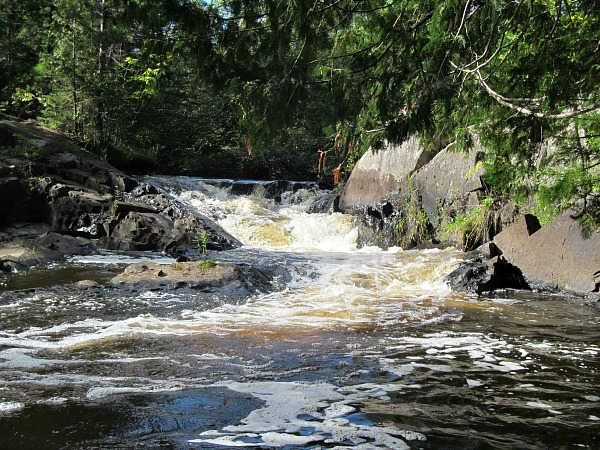 Next time you are in Marinette County, be sure to drink in a waterfall or two, but make sure you avoid getting cited for DUIW (Driving under the influence of Waterfalls). I visited only five falls on my way home because I feel moderation is key.

If you really want to party, there are double digit waterfalls to be found in Marinette County including Dave Falls and Bulls Falls. Check out this post for a more comprehensive look at the county’s waterfalls or this site on waterfalls in the Midwest.

If you would like a more structured approach, get a waterfalls tour map at the Ranger Station in Pembine. The map shows all 14 waterfalls. Another option is taking a giant loop with Highway 141 and Parkway Road.

Traveling Ted newsletter
Your information will *never* be shared or sold to a 3rd party.
6 shares