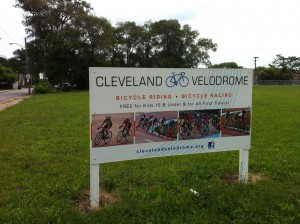 The sign that indicates a Cleveland Velodrome adventure is upon you

While visiting Cleveland the activity that least appealed to me on my itinerary was a stop at the Cleveland Velodrome. It turned out to be the surprise of the trip and one that was a lot more of an adventure than I thought.

I drove through block after block of city streets and some run down areas in search of the track. I thought sure I was lost. When the voice on my map app said my location was on my left, I was pleasantly surprised to see a sign for the Cleveland Velodrome. Tucked away in the far corner of an empty plot of land rose an oval cycling track. 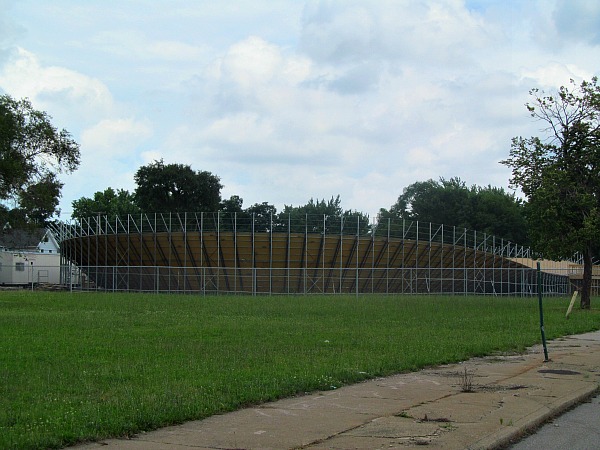 The Cleveland Velodrome rises from a neighborhood

I parked the car and entered the track. I walked down into the infield and introduced myself to Gary Burkholder. There was a 101 class in session that I was a little late to. Gary got me quickly fitted up with a bike and helmet and gave me a brief intro to riding a gearless bike.

The most important lesson is how to stop. With these bikes you simply pedal backward and this motion stops the bike pretty quickly. I got on the bike, and we tooled around the cement portion of the infield just to get used to the balance. 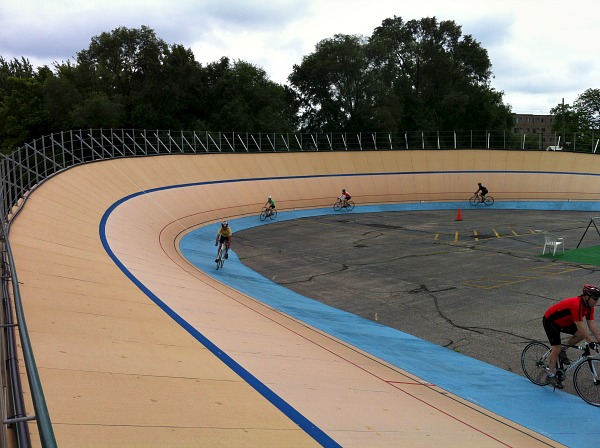 I started listening to the trainer talking to the 101 class. They practiced getting on and off the track from the apron. The apron is the blue wooden plank that bridges the track to the cement. You pedal around the center of the apron until your speed is sufficient and then you look behind you to make sure there is no traffic and then angle yourself on to the track. 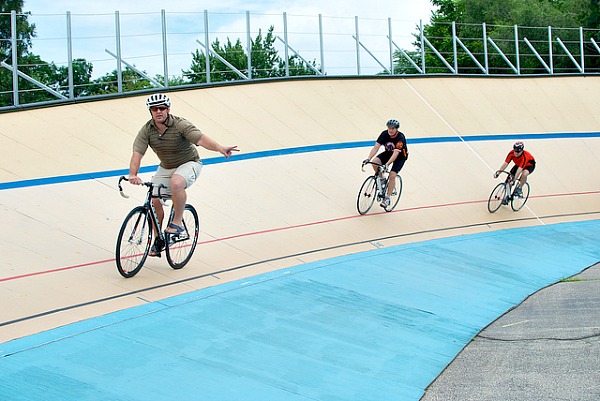 Speed is king when cycling the Velodrome. If you do not have enough speed the balance of the bike will seem shaky. Common sense and your natural instincts tend to want to go slow on something you are learning and unaccustomed to. If you follow this route, you will have a hard time staying on the track especially the higher up on the incline you go. 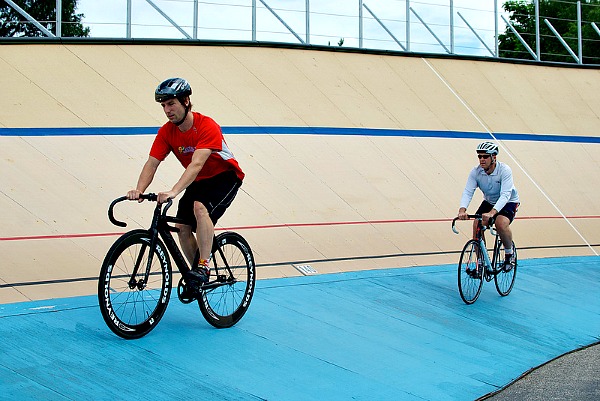 They had us do several drills over and over again to get us used to entering and departing the track and how to sit on the bike while riding the turns. You need to angle the bike away from the turn or you have the danger of hitting your pedal on the incline of the wall.

We then got the opportunity to ride higher up on the wall to the red line. I watched the class do it a couple of times, and then I followed Gary. The first time I climbed up the incline on the turn I did not have enough speed and fumbled down back to the apron. If you feel you are losing control, definitely retreat down the track instead of going up. 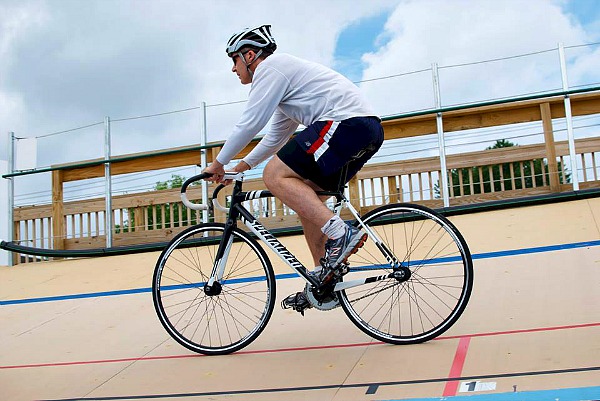 Tackling the red line along the curve – Photo taken by Anika

I knew I had to go faster, so the next turn I made sure to get more speed and this time when I rose up the incline and hit the turn I was surprised at how my momentum kept me upright, and I whirled around the corner. You then descend on the straightaway and build up your speed for the next turn and rise up again. Once again I flew around the inclined turn without faltering. 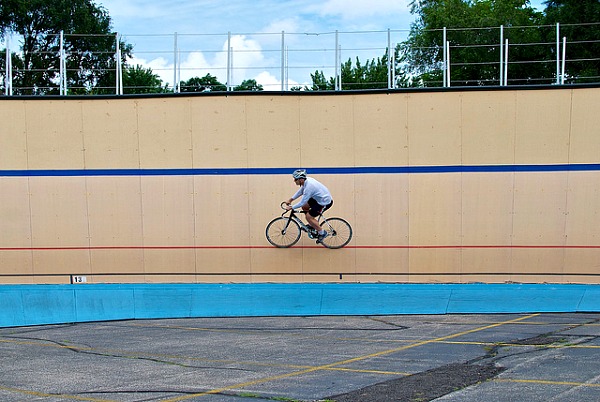 It takes a couple of lessons until newbies are ready to go up to the big blue line way up on the track. I was pleased with the fact that I made it halfway up the wall. The experience was quite a thrill and similar in adrenaline to downhill skiing. I could definitely see the appeal in the sport.

I was really impressed with the passion of the people at the Velodrome not only for the sport in general but for their desire to share this love with beginners. It was obvious Gary and the instructor Brett Davis really enjoyed what they were doing. Gary’s girlfriend Anika took some pictures of me riding and she is also a rider herself. During some of the instruction she gave me more detail about what was going on and also more information on the sport. 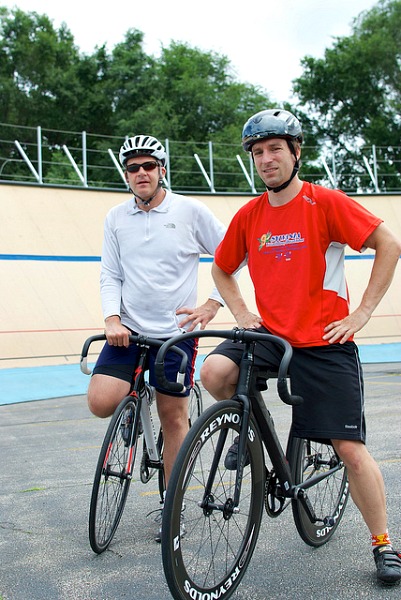 They asked if I had ever been to the Chicago track. I had no idea there was one. I definitely want to visit and try another lesson at this adventurous and thrilling sport. My time at the Cleveland Velodrome was quite a surprise and turned out to be one of the highlights of the trip.

The Cleveland Velodrome is a 166-meter Olympic style bicycle racing track. It is the only one of its kind between the East Coast and Chicago. The Velodrome features 50 degree banking in the turns. I was surprised by how much fun and intense the activity was, and I look forward to riding again either in Cleveland or Chicago. 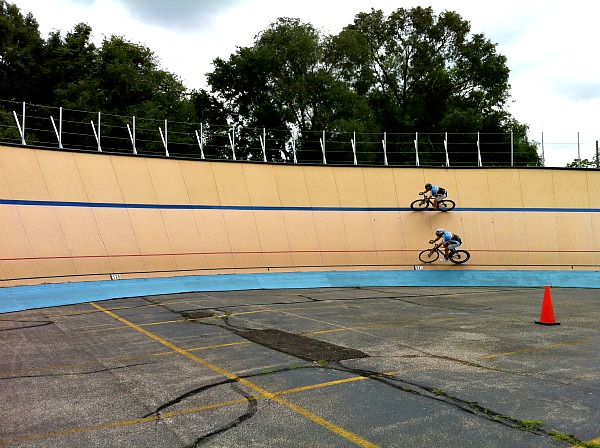 After the class was over, Gary and another rider did a demonstration on how it is done

Thanks go out to Gary, Brett, and Anika for taking me under their wing and enthusiastically sharing their passion for the sport. A big thanks also goes out to Anika for the photos of me taken above. If you ever get a chance to try to bike on a Velodrome fast track, definitely give it a shot.

My trip to Cleveland was in part sponsored by Positively Cleveland, but in no way does this fact color how I covered my experience at the Velodrome.