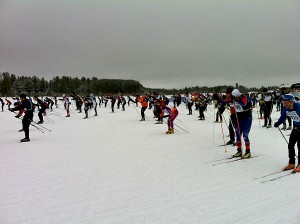 And they are off at the Birkie

Yesterday marked the 40th running of the American Birkebeiner cross-country ski marathon in Hayward, Wisconsin.  Over 10,000 participants skied the combined four races that make up this great event. 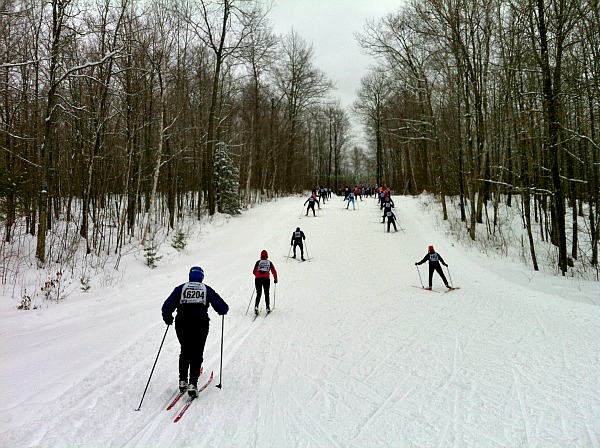 With a 54 kilometer course running through the northwoods of Wisconsin from Cable to Hayward, it is an event that is hard for media to adequately cover.  I strapped a GoPro video camera to my chest to take some video as we cruised through the beautiful pine trees in northern Wisconsin.

Here are five videos from different parts of the race.

Video one – the start

I actually missed the start.  They had the on deck group with their skis off, and I accidentally got in with them instead of my wave. I was late getting over there because I was taking pictures of the wave before me starting.  When I lined up I was in the wave after me on deck. With 30 seconds to go to my wave’s start, I realized I was in the wrong place. I ran up under the rope and put my skis on after the gun went off. With such a long race ahead of me it was no big deal as it is good to start off slow anyway.

Video two- Near the beginning

The 26 kilometer Korteloppet starts at the same time as the 54 kilometer Birkie, so the beginning is pretty crowded until the Kortie veers off about 7 kilometers in.  This video was taken while the two races were still packed together.

Every seven or eight kilometers the town of Hayward and Cable set up food stations manned by volunteers who distribute water, energy drinks, fruit, and even cookies. These morsels are much needed and provide a short respite for skiers during the arduous marathon.

Video four – I make a move

One of my last burst of energy during the last third of the race, I shot past a group of skiers.  I really petered out at the end and this was one of my last second winds. I pretty much went into the walking dead mode for the last ten kilometers.

The Birkie ends in downtown Hayward, Wisconsin. They actually truck in snow to cover Main street where the finish line is located at.