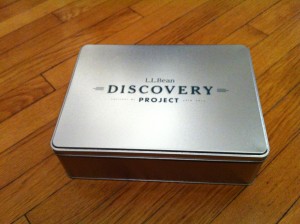 A box arrived in the mail the other day compliments of L.L. Bean. I have been invited to participate in the L.L. Bean Discovery Project where I would receive gear and go out and use it and report back. In the first box of goodies came an Ascent Gore-Tex jacket and a guide of hiking places around Chicago.

One of my favorite parks in the Chicago area is Rock Cut State Park in northern Illinois. I decided to hike the Pierce Lake Trail in the guidebook. Many Illinois parks are closed during deer hunting season, but Rock Cut remains open although there is limited hunting. I was glad that the gore-tex jacket was bright orange. 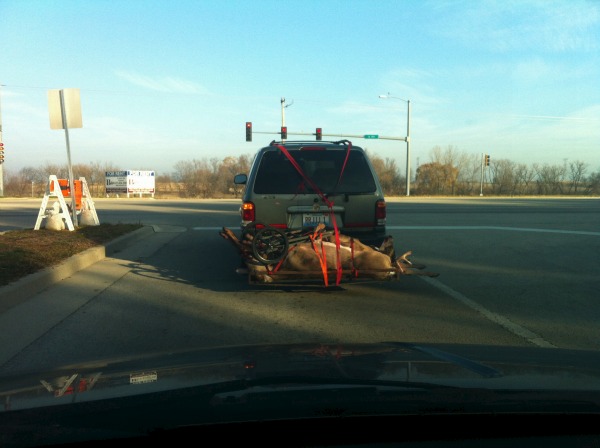 I arrived on Friday night around 10 p.m. and put up my tent and got a fire going. The nice thing about the new jacket is it provides warmth yet also breathes. This would come in handy as the temperatures plummeted into the lower 30s. 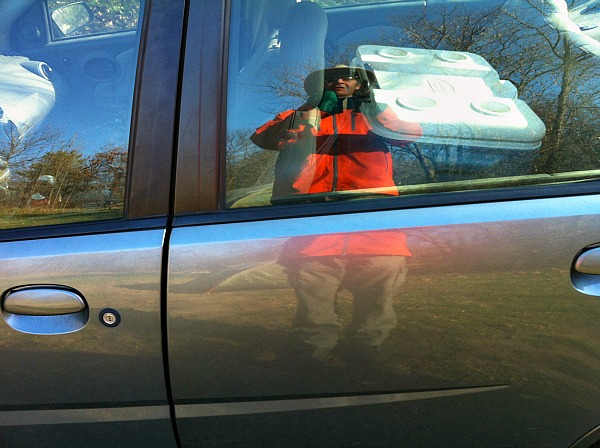 I woke up the next morning to a beautiful sunny morning and my camp site was only feet from Pierce Lake and the Pierce Lake Trail. The Take a Hike Chicago book by Barbara Bond, provided for me in my Discovery Project kit, indicated the trail was 4.5 miles around the lake and would take 2.5 hours. 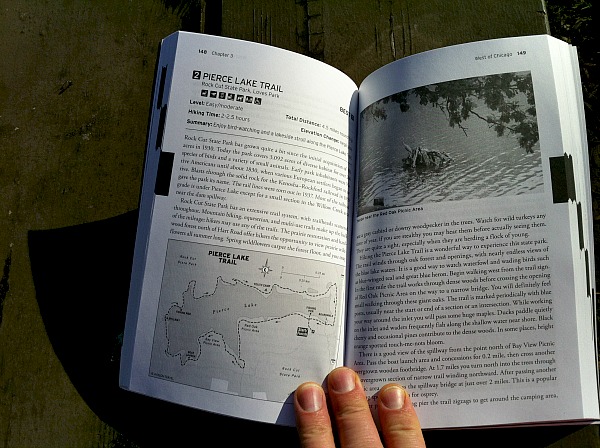 The trail was easy to follow as it basically hugged the shores of Pierce Lake for its entire length. There are several places to park along the way. I started at the Hickory Hills Campground, but there are several parking areas along the way and there is a concession with boat and tackle rentals although it was closed for the season. The Lone Star Café is open in the summer months and also rents skis when there is enough snow. 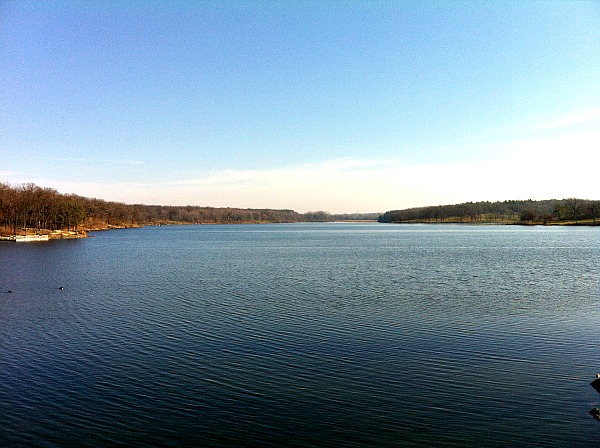 It was a beautiful day for a walk with temperatures in the middle 50s with hardly a cloud in the sky. Although bird migration has passed and many of the interesting birds have headed for warmer climes, a few species were still in attendance. A kingfisher, pied billed grebe, coots, Canadian geese, and juncos were spotted along the trail. Juncos are winter residence, so with so many of them flying in the trees, it was a reminder that winter is on its way as if the cold nights were not enough of an indicator. 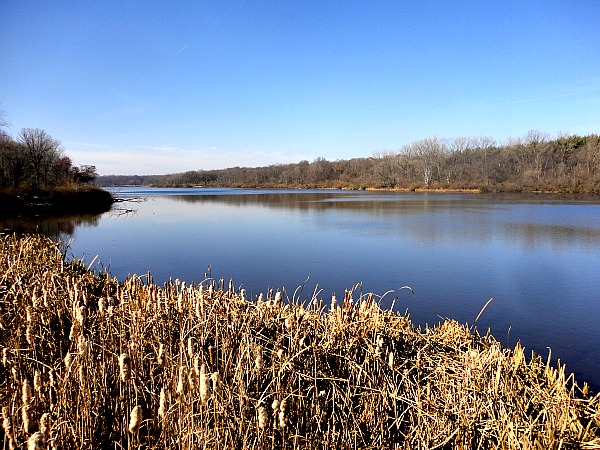 The trail was completed at 2 p.m., but I still felt like hiking. I consulted the guide for another hiking option in the vicinity, and I decided on Castle Rock State Park south of Rockford in the little town of Oregon, Illinois. I got there to find that the park was closed due to hunting. Fortunately, there are other parks in the area.

I headed over to Lowden State Park along the Rock River. I drove around looking for a parking lot and found one at a trailhead near a statue. I got out of the car to find a beautiful 50 foot statue of a Native American right along a bluff overlooking the Rock River. 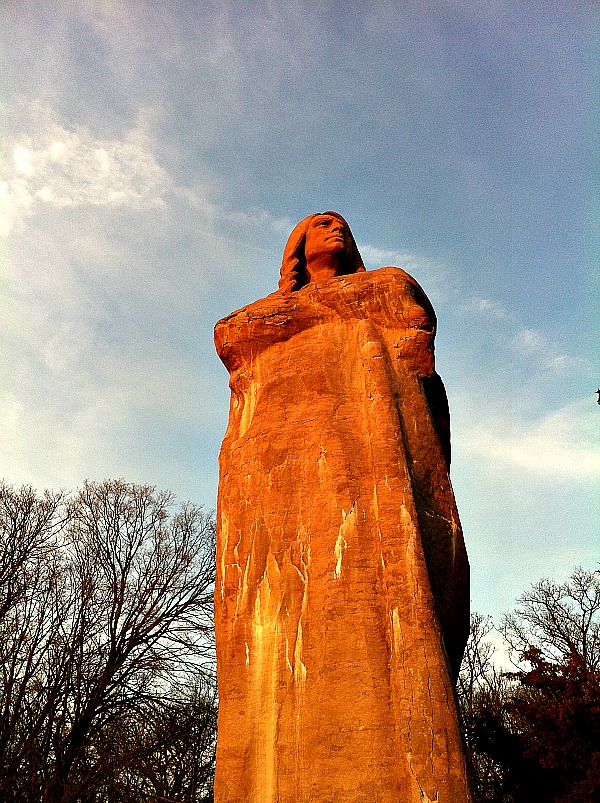 The statue commemorates the Blackhawk War which was fought in Illinois and Wisconsin between the U.S. and a band of Sauk Indians led by Chief Black Hawk in 1832. Abraham Lincoln, Zachary Taylor, Winfield Scott, and Jefferson Davis took part in this war on the U.S. army side.

I walked along the Rock River on the Blackhawk Trail and looped back on the Heckman Trail. The trails in this park can be hiked in less than an hour as it is rather small. 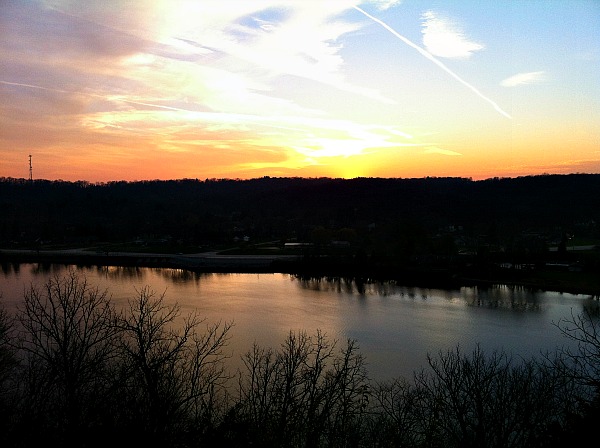 Enjoying a sunset along the Rock River at Lowden State Park

I ended up back at the statue for sunset and watched the sun disappear over the bluff on the western side. Before the sun faded is shone on the Native American statue and it glowed in the reflection in almost a crimson color. I got in my car drove back into town and then headed back to Rock Cut on U.S. Highway 2. I looked across the river and there was the statue still visible in the fading light. 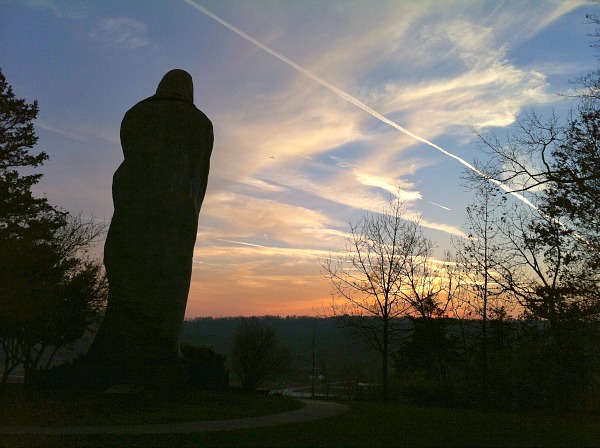 The statue and I enjoy the sunset over the Rock River 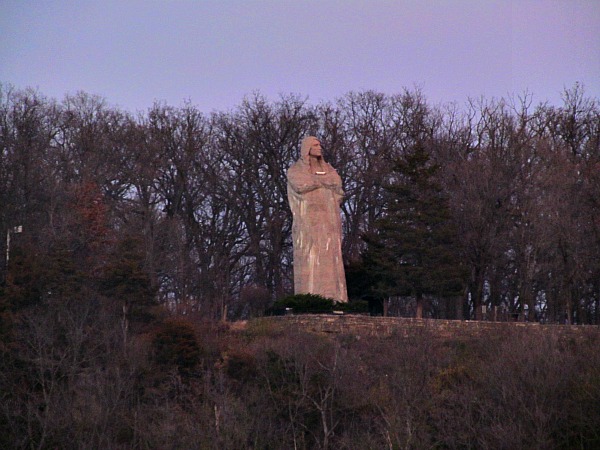 The statue from the other side of the river on U.S. Highway 2 north of Oregon

I love stumbling upon interesting things like this when traveling. Unknown travel surprises can happen anywhere, even in the farm fields of north central Illinois.