Interview with a first time American traveling overseas to Trinidad

The most read, shared, and searched article from Traveling Ted has been a response to CNN on why Americans do not travel overseas. My article tried to persuade American readers to get a passport, adventure, and explore the world. 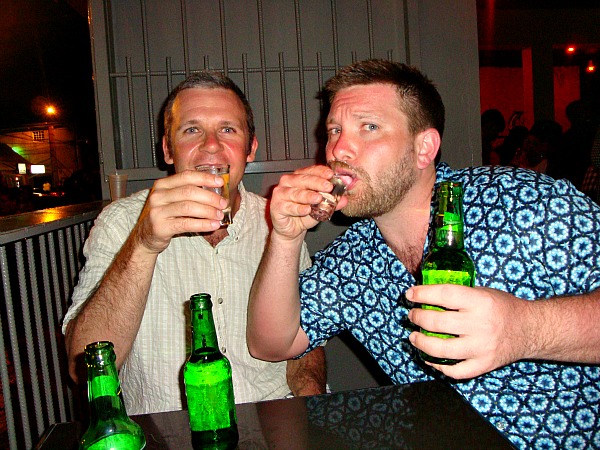 Usually, I travel alone, but earlier this year I flew with a buddy to Trinidad & Tobago to experience their Carnival, which is one of the world’s best parties. It was my friend Russ’ first travel experience abroad at the age of 33. Since only around 30% of the U.S. population owns a passport, I thought it would be an enlightening experience traveling with a first timer who only recently obtained his first passport. 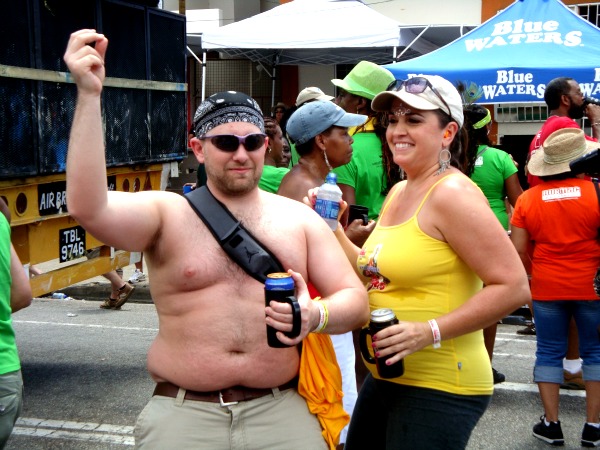 Trinidad & Tobago will never be the same

You are 33 years old and it is your first international trip? Why has it taken you so long to travel overseas?

A few factors came into play.  Money is always an issue.  Like many people, hostels aren’t something I’d be comfortable staying in, so just staying in a hotel for a week could easily cost you more than a grand.  Then airfare can be anywhere from a few hundred to even into the thousands.  You’re out two grand and that’s not even including spending money.

Besides that, unlike much of Europe, we live in a vast, expansive country.  From region to region, and sometimes city to city, it is so diverse, from the people and their regional accents, to the varying landscapes, as well as the weather, that traveling across America can be just as fulfilling as crossing the Atlantic or Pacific. 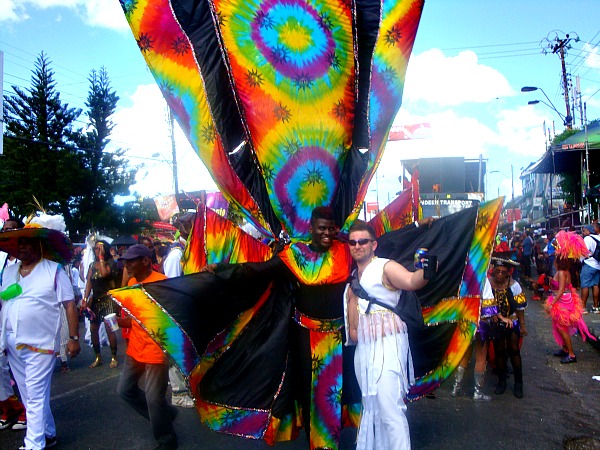 Russ mixing it up with the locals

Think about how we treat people when they ask us a question and they don’t know how to speak English.  I’d say the initial internal reaction of a great majority is to think “learn English you idiot,” and then politely tell them “Sorry, I don’t speak XYZ language.”  I’ve never wanted to put myself in that position where I’m in a country, and I’d need to depend on others because I can’t speak the native tongue.

What surprised you most about the trip?

The racial tolerance.  For the first time in my life, I was the minority.  I’m a short, white male in his 30s, with light hair and blue eyes.  I don’t stand out in any way in the northwest suburbs of Illinois.  But as soon as we got off the plane in Trinidad, we headed to St. James to party on their streets (literally, as you don’t go into bars during Carnival.  You just stop in them, grab a beer, then go and dance on the streets/sidewalks). 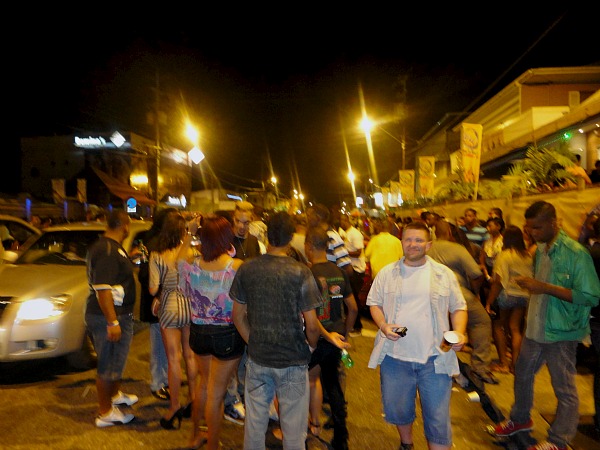 In St. James, there were a total of three white people (me, Traveling Ted, and our buddy Todd).  I immediately was picturing a scene from any movie where white people walk into a black neighborhood and the needle on the record comes to a screeching halt (think Animal House, Weird Science).  Instead, no one batted an eye.  We were just part of the crowd.  No weird “what are THEY doing here looks,” no one trying to start a fight with us to mark their territory.  In all honesty, I think it’s safe to say anytime you are the minority, there is always a sense of fear (justified or not), or that you don’t belong and everyone is looking at you.

For some reason, after about 5 minutes, that feeling had escaped me, and I felt no fear.  It’s a sad indictment on our country to say that I felt safer thousands of miles away, being in the extreme minority, than if I was in the same situation in Chicago or Detroit. 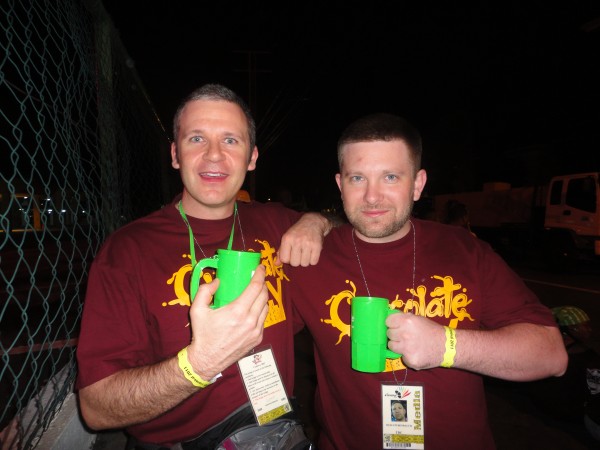 Russ and I at Chocolate City J’Ouvert

Did the trip inspire you to see other countries? If yes, are there any in particular on your list?

I’ve always wanted to go to other countries, and due to the success of this trip, I will surely be going on more international vacations.  Recall, I only want to hit up English speaking countries, so England and Amsterdam (editors note: Russ, the native tongue in Amsterdam is not English) are high on my list.  And if my posterior can take sitting on a plane for what will feel like eternity, I’d hit up the land down under and visit Paul Hogan and his pet kangaroos. 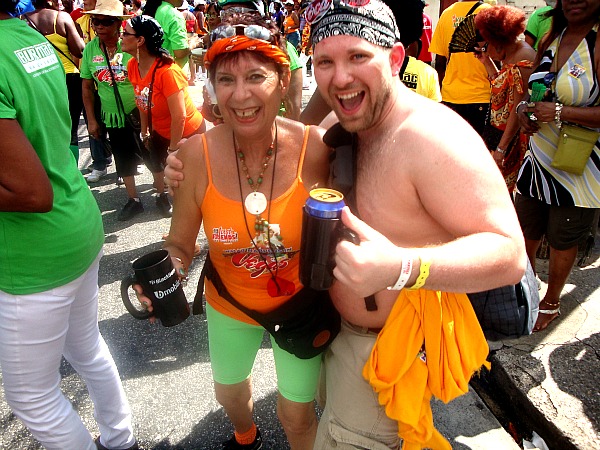 This interview will continue at another time. Russ is unique in many ways, but as far as attitudes on travel, I would say he is average. It is interesting to get into the mind of someone who is inexperienced traveling because as travel bloggers, we are trying to convince people like Russ to become more adventurous.

I think what is interesting in this interview is the trip assuaged some of his fears, but did nothing to remove his language barrier fear as they speak English in Trinidad & Tobago. Russ had a blast in Trinidad, and I know he would enjoy other foreign countries as well. 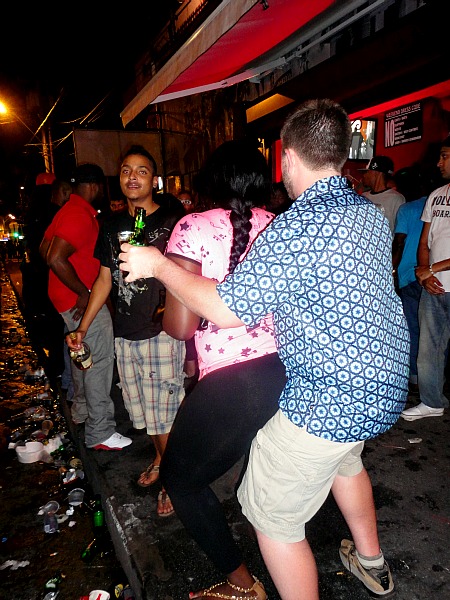 It is my next goal to get Russ to a country where English is not the native language and show him it is an adventure to travel there and not a struggle. Thailand, Costa Rica, and certain countries in Europe (like Amsterdam) are very easy to travel in without knowledge of the native tongue.