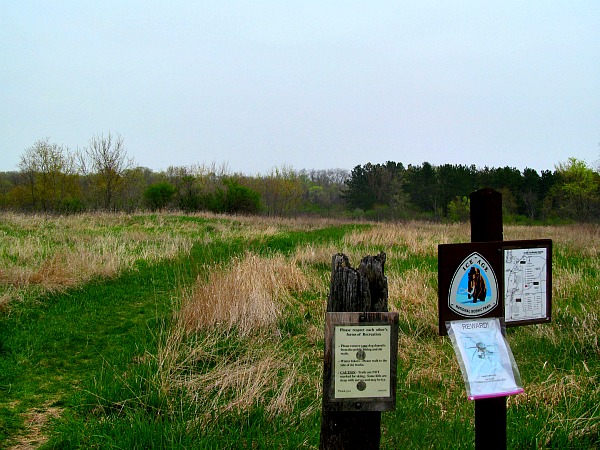 The trailhead at Hughes Road at the Brooklyn Wildlife Area

The Brooklyn State Wildlife Area is a great Ice Age Trail day hike. A couple of weeks ago at Canoecopia in Madison, Wisconsin I stopped by the Ice Age Trail booth. I asked Executive Assistant Matt Kaufmann if there were any good sectors of the 1,100 mile trail besides the Kettle Moraine areas. I have hiked extensively in North and South Kettle Moraine, and I love those stretches, but I wanted to try a different portion of the trail.

Matt opened the Ice Age Trail Atlas and pointed to the Brooklyn Wildlife Area. The sector is halfway between Janesville and Madison just west of Highway 14 off of State Route 92.

I parked the car on Hughes Road just north of 92 and started walking. Immediately, I began to hear the distant croaking of sandhill cranes as I began walking through open prairie. I had seen three just down the road in a farmer’s field. 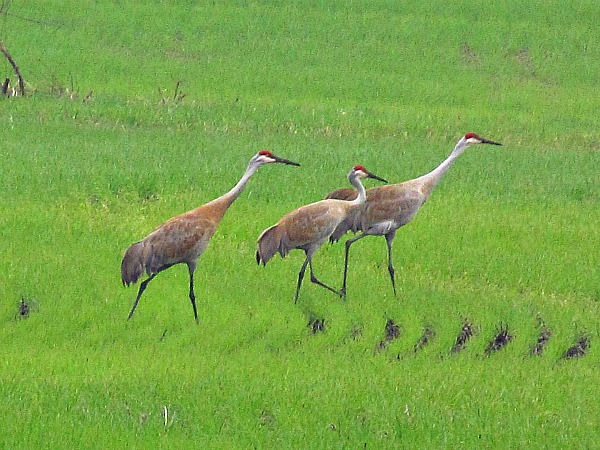 The terrain is typical of your southern Wisconsin and Northern Illinois geography. The trail goes through rolling hills (moraines as they are called here in glacial areas) with a mix of hardwood forest, tallgrass prairie, wetlands, and a sprinkling of pine forest. The trail also skirted a few manmade areas passing by a few houses and farms.

The trail is well marked with a couple of maps along the way with “you are here signs,” in case you were wondering. There are five numbers along the map signifying points of interest on the map including a couple of overlooks. The first overlook I was to come by was Crane Overlook.

So far the scenery had been pleasant, but nothing spectacular as the trail turned into the woods for the majority of the first mile and a half. This changed at Crane Overlook. Suddenly, the trail emerged onto a hilltop overlooking a broad expanse of prairie with rolling hills and farmlands in the distance. The day was a little cool, but a perfect breeze was kicking up that felt great after working up a sweat hiking through the woods. 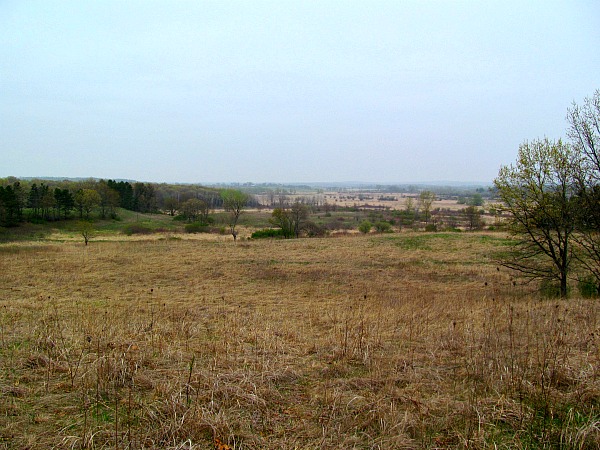 The view from Crane Overlook onto a Shire like scene

The view, the endorphins, and the breeze made for a feeling of euphoria as I gazed out over this almost Shire like scene. Just when I thought things could not get any better, they did. In the distance a formation of birds waddled out into the open prairie from nearby shrubs. They looked awkward as they cautiously ambled forward in single line. At first, I thought they were ducks or geese, but I zoomed in on them and they turned out to be a gaggle of turkeys. I moved forward to get a closer look, and their awkward gait changed instantly as they sensed danger. They immediately darted back into the shrubs moving suddenly in impressive dexterity. 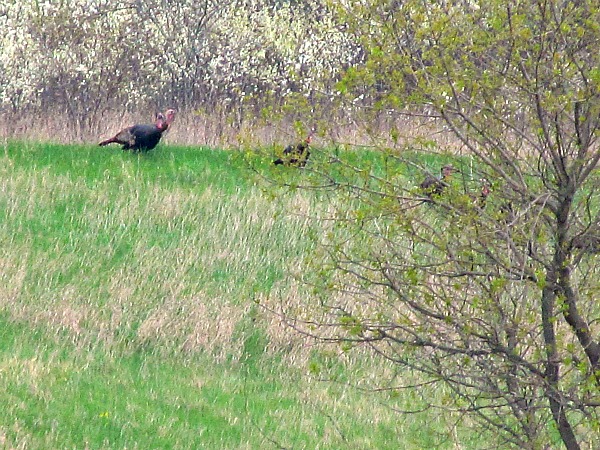 A gaggle of turkeys moving through an open field 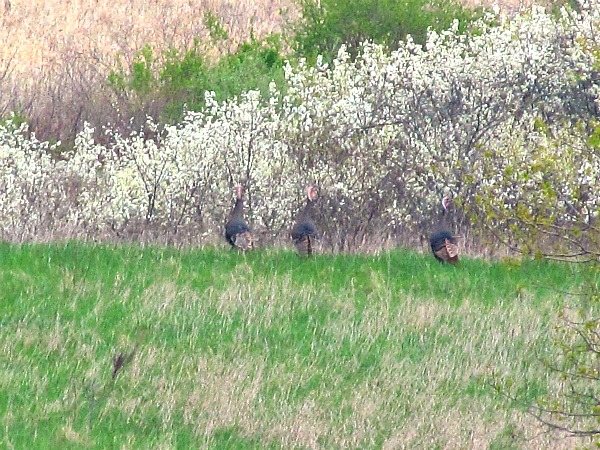 Before they disappeared, I was able to snap a few pictures, and I felt even better about the day and continued forward along the trail. The next couple of miles stayed primarily in the open prairie with continued beautiful scenery ahead on the trail and farther in the distance.

The best part about the trail going through the wildlife area is its accessibility. There are three small parking lots, each one a couple of miles apart. There are also a network of other trails that loop through the protected area. Through the prairie it is also possible to walk cross-country especially during the spring when the prairie grass is not too tall and the ticks are not yet out. The completed section of the Ice Age Trail through this area is only about 6 or 7 miles, so there is no overnight backpacking or camping. New Glarus Woods State Park is close by for those looking for camping. 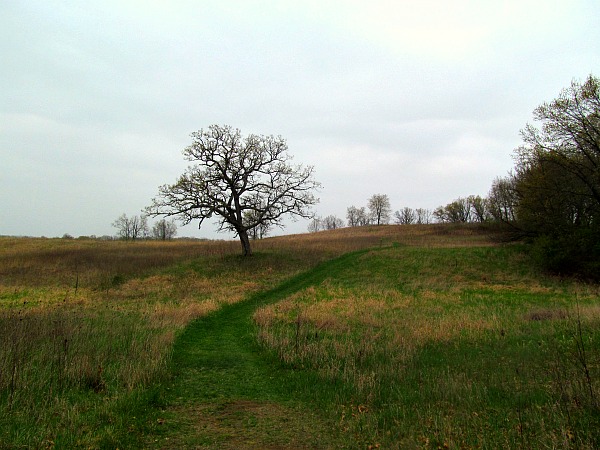 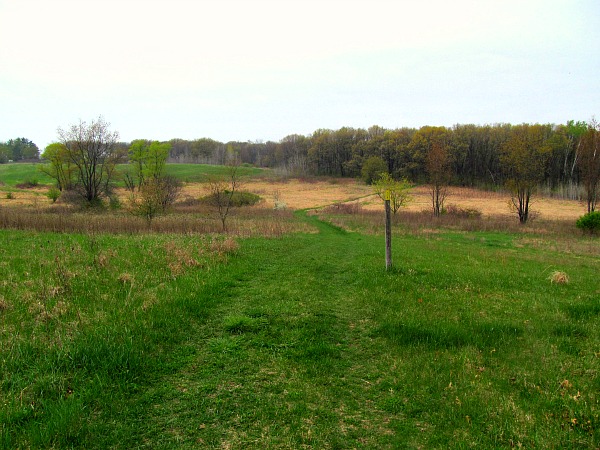 The bird life is another highlight of the area. Besides turkeys and sandhill cranes, I also spotted flickers, hairy woodpeckers, eastern bluebirds, a red-tailed hawk, chickadees, cardinals, blue jays, and a pheasant. Not a bad list for an early spring walk before the main migration begins. Fishermen will also enjoy the area as Story Creek, which runs through this zone, is listed as a quality trout stream according to the DNR. Being a glaciated region, the area has some nice hills, so I will definitely be back in winter for some cross-country skiing.

It is always fun finding new places to hike, especially ones not many have heard of. It was obvious the area is little used as even on a Sunday afternoon the park was mostly empty except for a roving band of turkeys. 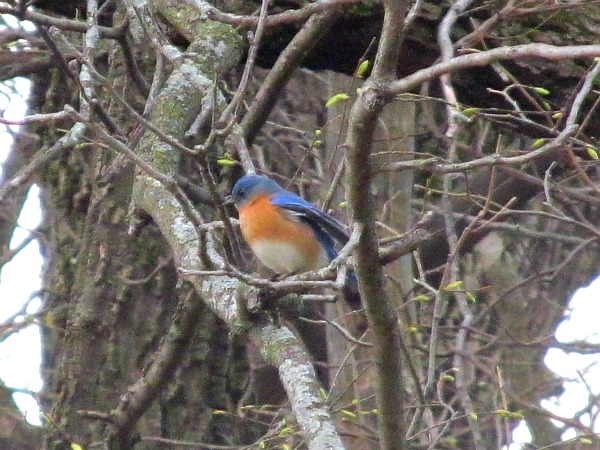 An eastern bluebird in a tree at Brooklyn Wildlife Area