Photos of the week: Escaping the heat in Nha Trang, Vietnam 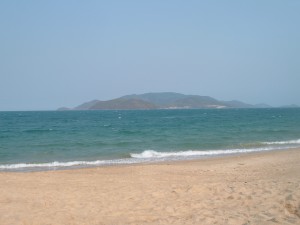 The recent sweltering heat wave gripping the Midwest reminds me of my first couple of months in Southeast Asia. The first two countries on the itinerary were Thailand and Cambodia. Except for a few nights when I was in the hills of northern Thailand the temperature seemed to always exceed 90 degree Fahrenheit with high humidity.

Having lived in Chicago for most of my life and having Scandinavian blood in me, I prefer cooler climes. I was excited when I finally made it to Vietnam and could escape the oppressive heat with a swim in the ocean. My first beach town was Nha Trang.

Nha Trang did not disappoint as far as the beautiful beach was concerned, but unfortunately, I was harassed by peddlers and boisterous kids. The kid in this picture was especially a pain in the neck. She was as annoying as she is cute. She tried to sell me post cards, which I really did not want. In order to appease her and hope she would leave, I bought a pack.

She wanted to sell me the worst postcard book in her collection, but I negotiated to get the best set of pictures. Later, I discovered that she reached into my bag and switched the good pictures with the bad ones. Worst still, she did not leave after the purchase.

Then an army of peddlers came by and tried to sell me stuff from their mobile convenience store. They had these boards with holes on it with stuff like chewing gum and sunglasses stuck in them. The ladies would come by and stop at your towel and point to each item on their tray. You had to shrug “no” for every item. Then two minutes later another lady would do the same thing with the same exact items. 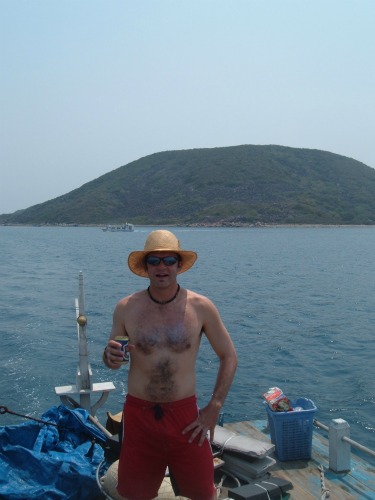 I later went on a booze cruise, which is the one tour this town is famous for, and it was awesome and well worth it. We cruised to a cool snorkeling spot, had a fantastic lunch, got entertained by a cool group on the boat that played Ob-la-di-bla-da by the Beatles , and they deposited us on a private beach with no peddlers and no punk kids. 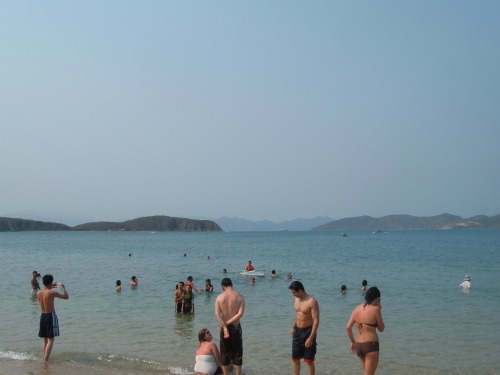 If I had to do Nha Trang over again, I would do the booze cruise every day. There was not anything else in town very exciting. No need to book this in advance as every hotel and tourist agency can get you a ticket for around $15.00. Definitely do the booze cruise in Nha Trang and avoid the general beach if you want peace and quiet.