Chautauqua National Wildlife Refuge has been a place that I have wanted to adventure travel to for 30 years.  Growing up my parents had a bird book published by Audubon.  On one page they listed the fifty states and the top birding destination for each state.

Florida had the Everglades and Wisconsin had Horicon Marsh, and the destination of choice as designated by Audubon for Illinois was Chautauqua National Wildlife Refuge.

Chautauqua National Wildlife Refuge is located on the Illinois River about three hours southwest of Chicago.  Their website states that: “Chautauqua Refuge is situated in the middle of the Mississippi Flyway along the Illinois River near Havana, Illinois. It is an important link in the chain of resting and feeding areas for waterfowl and other migratory birds in the flyway. The refuge has been designated a Globally Important Bird Area and a Western Hemisphere Shorebird Reserve Network site.”

I have always wanted to go there and for one reason or another I have never made the journey.  I even drove past the sign to the entrance multiple times driving back and forth from home and Western Illinois University where I went for graduate school. 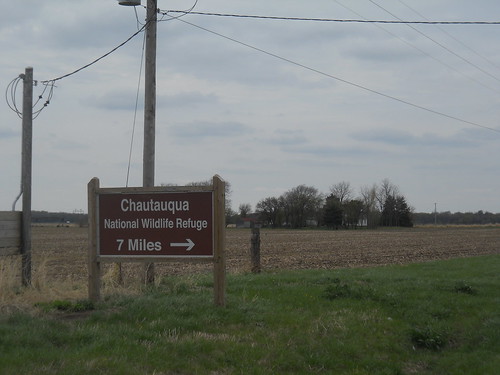 Since I have failed to make it there for 30 years Chautauqua has festered in my mind and taken up an almost mythical quality as a birding Valhalla.  I finally made it there yesterday.

There is a trail that follows Lake Chautauqua with some boardwalks that give views over the lake and the shoreline.  Several wood ducks bleated and cried as they flew away from out of the foliage along the shoreline.  Warblers, cardinals, robins, and many other types of songbirds chirped from the woods.  A pecking sound echoed from one of the dead trees and my binoculars panned up to spot a red-headed woodpecker. 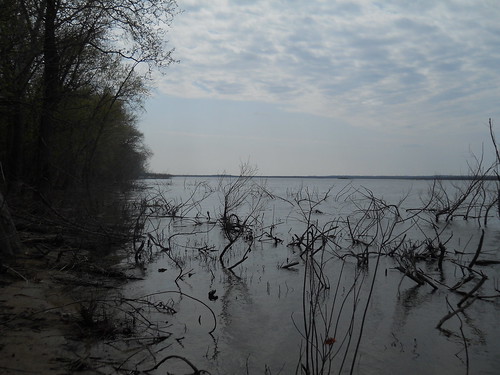 I then parked at the Eagle Bluff parking lot and ventured out onto one of the dykes and crossed over to view the Illinois River.  Double-crested cormorants, more wood ducks, great blue herons, and Canadian geese were viewed in the trees along the shore and the sloughs bordering the river.

It was obvious that there are a lot of birds here, but I was not that impressed.  The scenery was ok, and the birds were plentiful, but so far I had not seen any heavy hitters.  No bald eagles, osprey, egrets, or any bird that would stand out when reporting to someone what I saw.

As I started for home I saw a white spot way out on the other side of the lake.  I pointed my binoculars and saw a white pelican.  Many think Florida and coastal areas when they think pelicans, and this is true with brown pelicans.

In contrast, the white pelican lives along the coast also, but will spend its summer inland and as far north as Alberta, Canada.  During the white pelican migration they can be seen up and down the Mississippi River and also along the Illinois River. 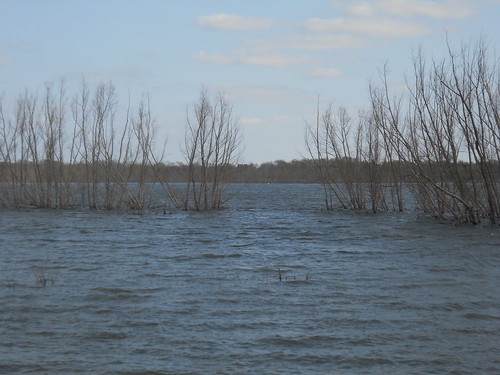 The white speck across the lake is a white pelican 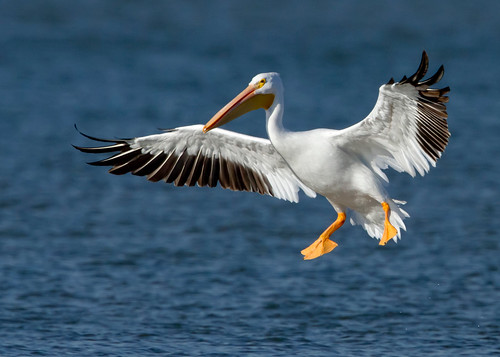 A white pelican close up thanks to Wikimedia Commons

I was glad to see a white pelican, but I still felt a little disappointed with the experience.  I am not sure what I expected, but after 30 years of my mind turning this into bird wonderland in Illinois I was a little let down.  I had seen more birds in my backyard in Barrington, Illinois in suburban Chicago at a heron rookery at Baker’s Lake. 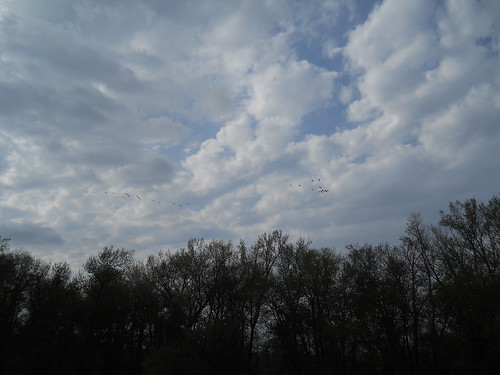 I then turned my head and looked up and saw two white pelicans flying overhead.  Then I looked over the tree line and over a hundred pelicans in V shaped migration pattern buzzed overhead on their way north.  Ok, I think I get it now.