Khao Yai National Park in Thailand can be accessed through the Pak Chong 7-11 via a sawngthaew according to the Lonely Planet Guide.  A sawngthaew is a Thai word for a pickup truck with long benches on each side of the back.  When I arrived at the 7-11 I was approached by some local entrepreneurs advertising a taxi to Khao Yai for 8$. I said no thanks and walked around the corner and paid 50 cents for the sawngthaew.

I got to the park around 3:30 pm. I paid the entrance fee and asked where the tent camp was. The man at the gate said 14km. I said any food available, and he again said 14km. The Lonely Planet did not mention this. He said I could hitchhike. I started walking into the park and stuck my thumb out and the first car sped past. I was a little dejected. 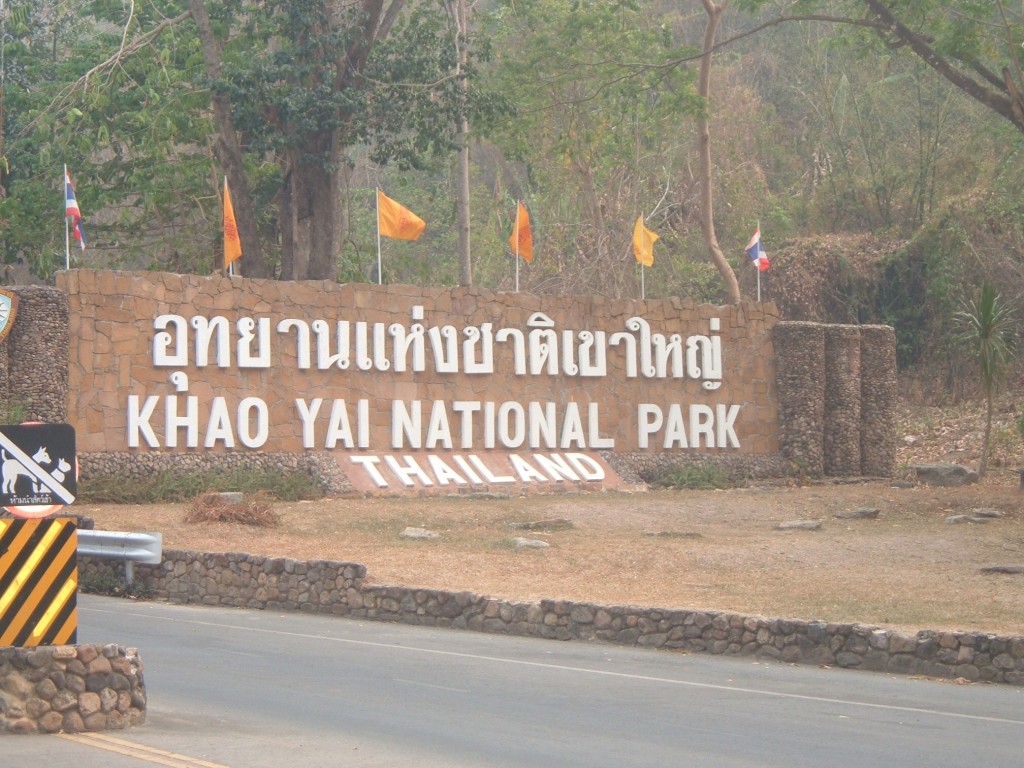 After walking one kilometer with no other cars I heard one approaching and before I even pivoted around to stick my thumb out it began to slow. It was a pickup truck with about eight young Thai guys in the back. They all had big smiles on their faces and motioned for me to get in. I threw my bags in the back and took a seat. 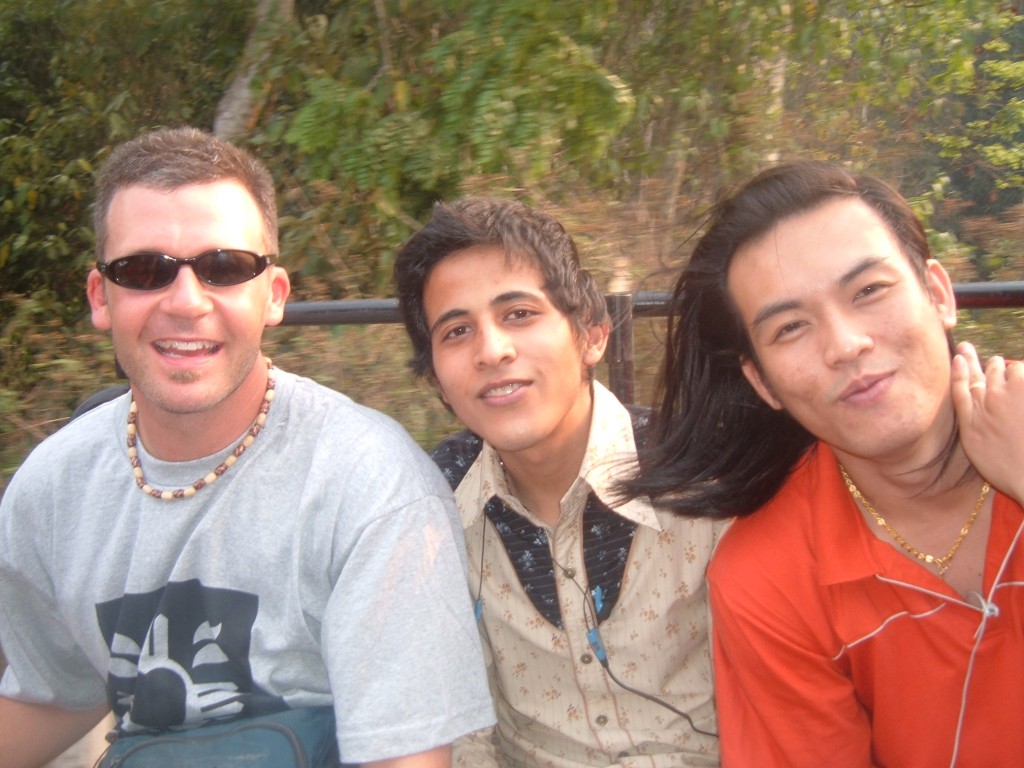 Me with my new friends – Kak is next to me

I was very thankful I found this ride as the 14km into the park was straight up. At one point in the ride there was a sign warning of tiger habitat as we were driving through all this lush vegetation. Not the kind of place I wanted to be walking by myself especially with dusk approaching. 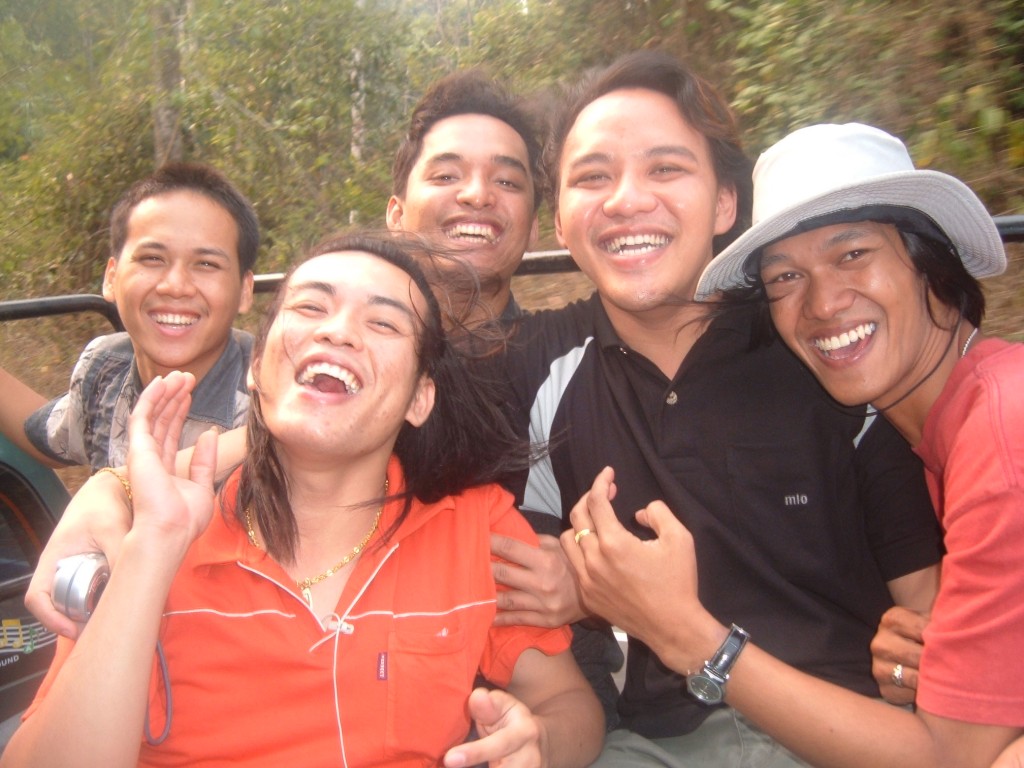 When we got to the visitors center they motioned for me to follow. We then headed down a hill to a bunch of buildings, which was like a camp. There were wild monkeys walking around all over the premises. The vegetation next to our tents was incredibly thick and millions of butterflies hovered over every tree.  I was excited to be in a jungle environment.  A man from the park began to collect fees and the Thai people began giving him money. I asked how much, and they told me for me it was free. 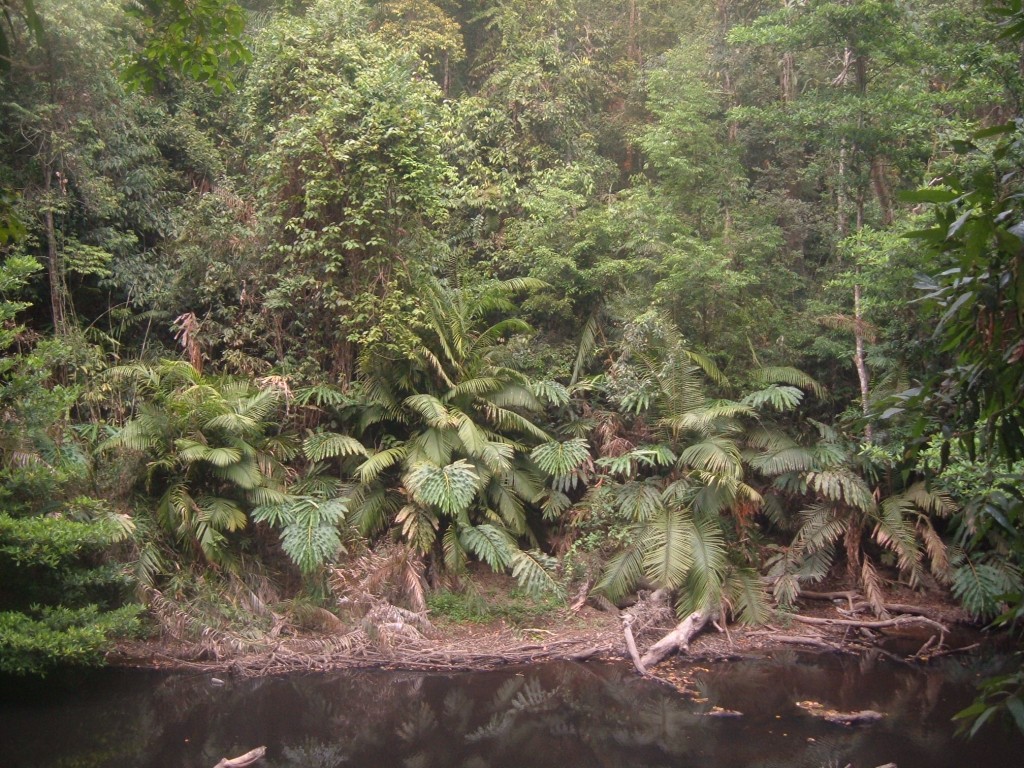 Thick vegetation across from our campsite 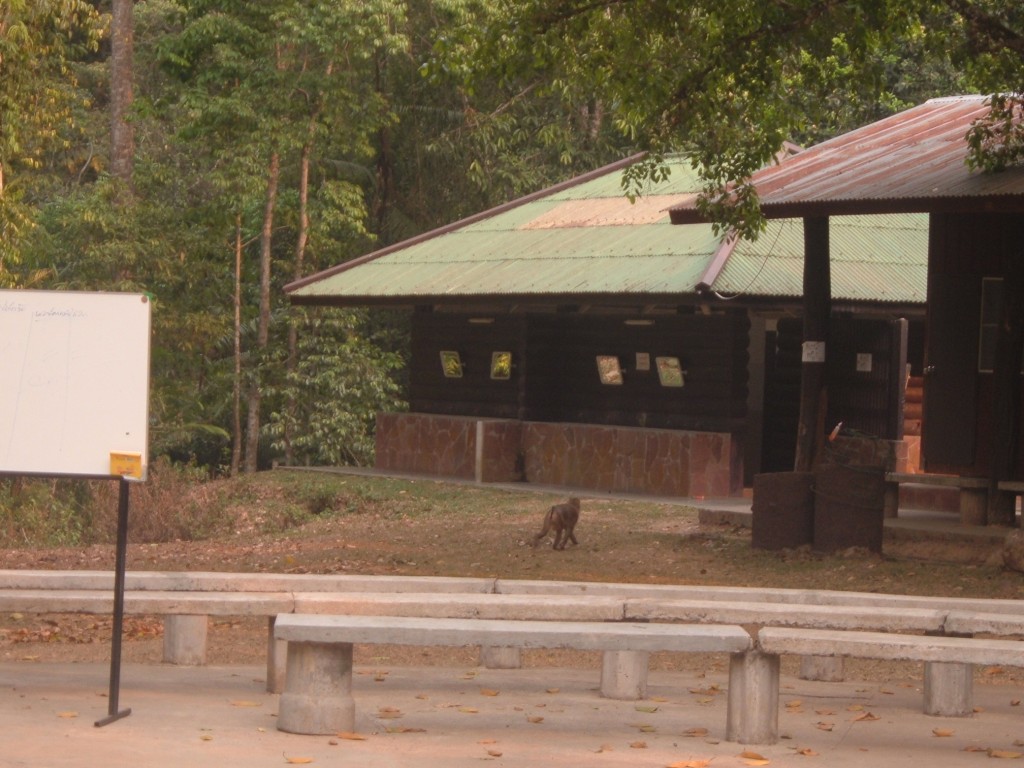 It turned out these guys were all Thai university students and they had just finished an exam and were taking a break. In fact, their teacher was with them.

We began to set up camp. I took my camera out and was going to take a picture of the Thai people putting up their tents. They all stopped what they were doing and excitedly got all together and posed. There was one guy who was about 50 meters away. When he saw I was taking a picture he sprinted over yelling for me to wait. They then got a camera out and made me get into one of the group pictures. They also had me take a picture with their teacher when they found out I was a teacher also. 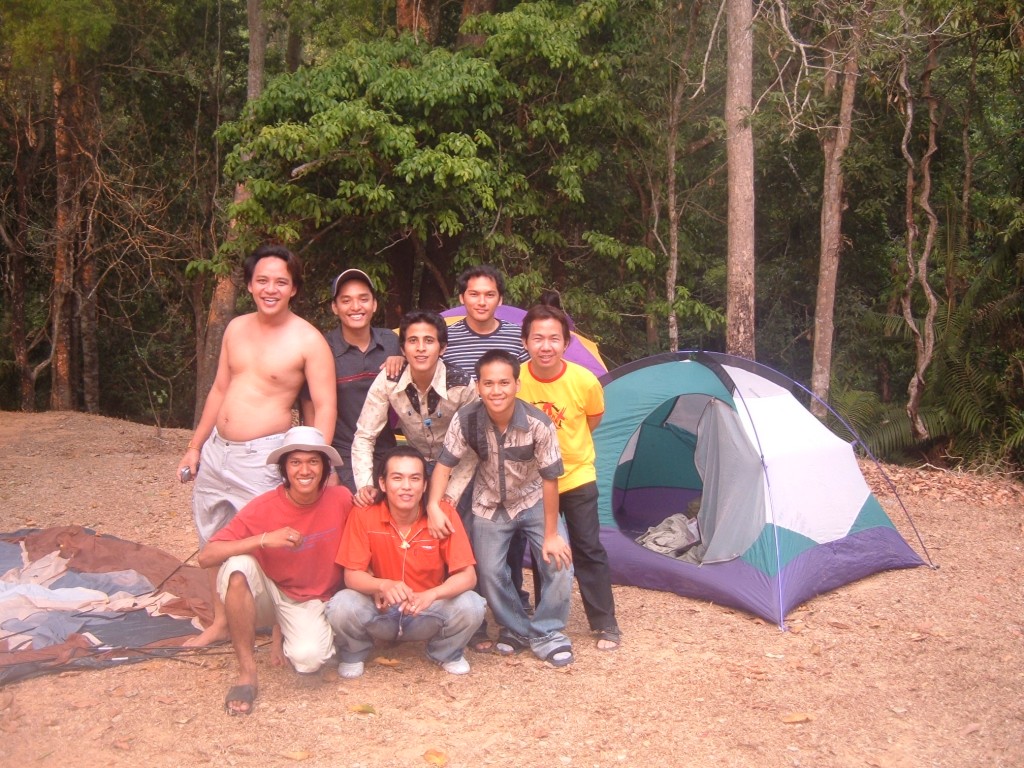 After setting up camp they gave me this bamboo pole that when cracked in half had this purple matter in between. They told me to eat it. It turned out to be this delicious fruit.

Then they got out these Styrofoam containers which had rice and meat entrees inside. They gave me one. I tried to give them money, but again they said for you it is free. Thai whiskey followed and they poured me a drink. Once again I tried to pay and was refused.

The best English speaker of the group was named Kak, and he was the self appointed main contact with me.  All of them could speak decent English and they would all chime in when they felt Kak’s description was lacking a detail.  After every time I tried to give money it was always Kak who refused it.  He repeated the same saying every time.  He would say “for you my friend,” and then pause for dramatic effect and say “it is free,” and then smile.  He was quite a character. 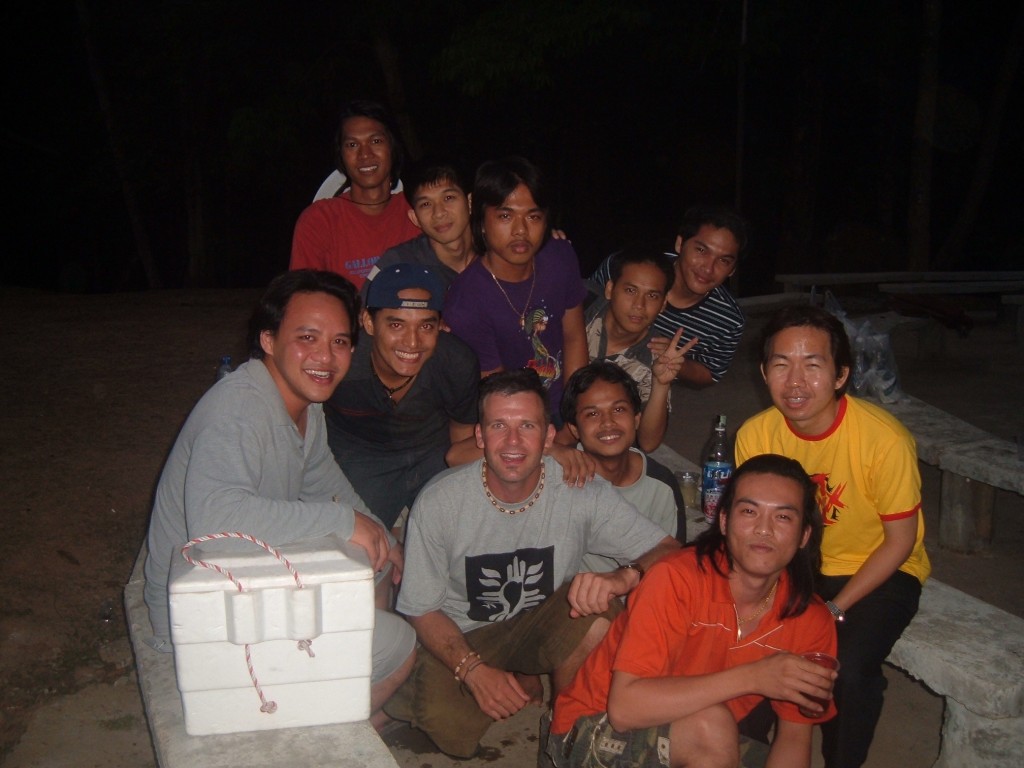 Having a great time in Khao Yai

They brought so much food and drink to this little camping trip it appeared they were going to be here for a week. They were only spending one night. It was almost like they asked themselves when shopping for this excursion “what if we meet a dumb tourist hitchhiking with two backpacks who is hungry and thirsty?” Then decided to get more food and drink. Every time my glass was even near empty they filled it with more whiskey, soda water, and ice. Later they brought out a 12 pack of Leo 24oz beers and same scenario ensued with the beer.